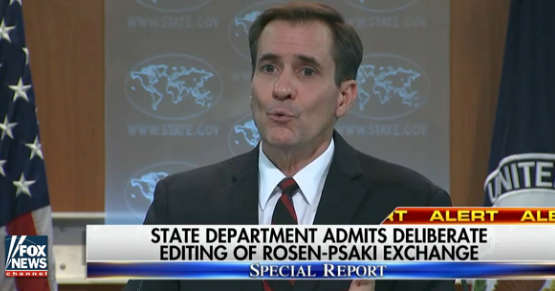 The State Department, in a stunning admission, acknowledged Wednesday that an official intentionally deleted several minutes of video footage from a 2013 press briefing, where a top spokeswoman seemed to acknowledge misleading the press over the Iran nuclear deal, according to Fox News.

“There was a deliberate request [to delete the footage] – this wasn’t a technical glitch,” State Department spokesman John Kirby said Wednesday, in admitting that an unidentified official had a video editor “excise” the segment.

The State Department had faced questions earlier this year over the block of missing tape from a December 2013 briefing. At that briefing, then-spokeswoman Jen Psaki was asked by Fox News’ James Rosen about an earlier claim that no direct, secret talks were underway between the U.S. and Iran – when, in fact, they were.

Psaki at the time seemed to admit the discrepancy, saying: “There are times where diplomacy needs privacy in order to progress. This is a good example of that.”

However, Fox News later discovered the Psaki exchange was missing from the department’s official website and its YouTube channel. Eight minutes from the briefing, including the comments on the Iran deal, were edited out and replaced with a white-flash effect.

But on Wednesday, current State Department spokesman Kirby said someone had censored the video intentionally. He said he couldn't find out who was responsible, but described such action as unacceptable.


While saying there were “no rules [or] regulations in place that prohibited” this at the time, Kirby said: "Deliberately removing a portion of the video was not and is not in keeping with the State Department's commitment to transparency and public accountability.”

Kirby said he learned that on the same day of the 2013 briefing, a video editor received a call from a State Department public affairs official who made "a specific request ... to excise that portion of the briefing."

Kirby says he has since ordered the original video restored on all platforms and asked the State Department's legal adviser to examine the matter. He said no further investigation will be made, primarily because no rules were in place against such actions.

Kirby said he has ordered new rules created to prevent a recurrence.

The Psaki footage took on new significance last month on the heels of a New York Times Magazine profile of Deputy National Security Adviser Ben Rhodes, who boasted of creating an “echo chamber” to sell the Iran deal.
Posted 4:57:00 AM