Trump Lashes Out At Press During Vets' Presser 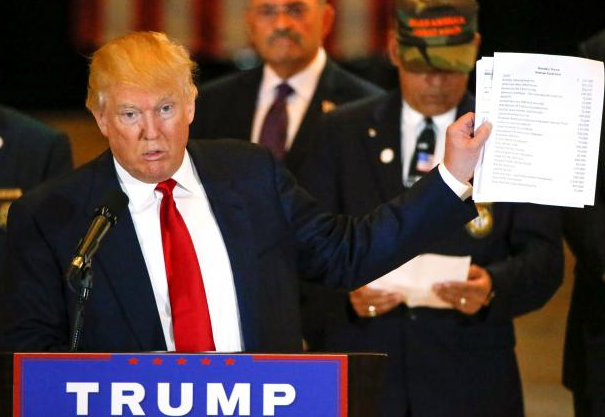 At a combative news conference at Trump Tower, the billionaire detailed $5.6 million from a fund-raising effort in January in Iowa.

"The press should be ashamed of themselves," Trump said. "You make me look very bad. I’ve never received such bad publicity for doing a good job."

According to The Hill, Trump became irritated by reporters who questioned why it had taken so long to make the donation, noting that Trump held the fundraiser for veterans all the way back in January.

“It seems to me you’re resistant to the kind of scrutiny that you get with running for president of the United States?” said CNN anchor Jim Acosta.

Trump said the effort had raised $5.6 million and was being distributed to 41 groups that are dedicated to helping military veterans. He said the total could climb higher as more money comes in.


I have raised/given a tremendous amount of money to our great VETERANS, and have got nothing but bad publicity for doing so. Watch!
— Donald J. Trump (@realDonaldTrump) May 31, 2016


Trump turned the microphone over briefly to Al Baldasaro, a Trump supporter and a veteran from New Hampshire who also skewered the news media, saying reporters should "get your head out of your butt and focus on the real issues."

Trump read out a list of veterans' organizations that had received money from the January event, which he attended instead of participating in a Fox News-sponsored candidates' debate.