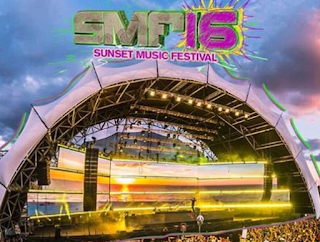 Two people have died and 57 others are in hospital after attending a Florida music festival.

Katie Bermudez, 21, from Kissimmee, and father-of-one Alex Haynes, 22, from Melbourne, died from likely overdoses of an undetermined drug at the Sunset Music Festival, according to reports, including The Daily Mail and AP.

They were among the 50,000 people who attended the EDM event at the Raymond James Stadium in Tampa.

A spokesperson for St. Joseph's Hospital in Tampa told WFLA the number of people coming to the hospital for drug overdoses over the weekend was 'frightening.'

Tampa police officers made more than 30 arrests at the festival; 25 were classified as felonies and 8 were misdemeanors.

The Sunset Music Festival was held at Raymond James Stadium on Saturday and Sunday.
Haynes died Sunday while Bermudez died Monday. The medical examiner's office wasn't immediately reporting a cause of death.

But reports suggest the both overdosed. Police didn't say why the 57 other people were hospitalized.
Katie Bermudez had turned 21 just a week before she left for the festival with a friend.

Her mother Nancy told Fox 13 she didn't think her daughter was a heavy drug user.