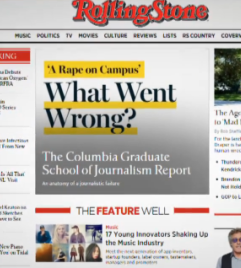 The Columbia University Graduate School of Journalism issued a scathing report Sunday on the editorial breakdown at Rolling Stone magazine that allowed publication of a searing, now thoroughly discredited story about a woman who said she had been gang raped at the University of Virginia, ending a three-month review meant to shed a light on and calm the storm surrounding a saga that had triggered a police probe and institutional soul searching at the university.

According to USAToday, Rolling Stone, had backed off from its original story in December, also officially retracted the article, titled "A Rape on Campus," and said it will implement recommendations about journalistic practices that are listed in the report.

The 13,000-word report concluded that the magazine's editorial policies clearly have failed in catching the reportorial shortcomings by the story's author, Sabrina Rubin Erdely.

"The failure encompassed reporting, editing, editorial supervision and fact-checking," the authors wrote. "The magazine set aside or rationalized as unnecessary essential practices of reporting that, if pursued, would likely have led the magazine's editors to reconsider publishing Jackie's narrative so prominently, if at all. The published story glossed over the gaps in the magazine's reporting by using pseudonyms and by failing to state where important information had come from."

The magazine's owner, Wenner Media, asked the Columbia University Graduate School of Journalism in December to carry out an objective third-party review of its editorial process that contributed to the deeply flawed 9,000-word story.