The Tonight Show Starring Jimmy Fallon” and “Late Night with Seth Meyers” have dominated late-night ratings for the week of March 30-April 3, outscoring their ABC and CBS time-period competition in every key measure — adults, men and women 18-34, 18-49 and 25-54, plus total viewers.  In the 11:35 p.m. ET hour, Fallon outdelivered ABC’s “Jimmy Kimmel Live” and CBS’s “Late Show with David Letterman” in all key measures. Meyers prevailed over Corden in the 12:35 a.m. hour in every key category and won his head-to-head 12:30-1 a.m. half-hour versus “Nightline” in each of those measures.

Season to Date, ABC's This Week” is outdelivering NBC's Meet the Press in Total Viewers and Adults 25-54 for the 2nd Year in a Row Seeing its Largest News Demo Lead in 21 Years ABC News’. 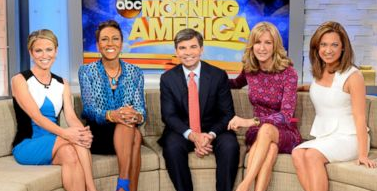