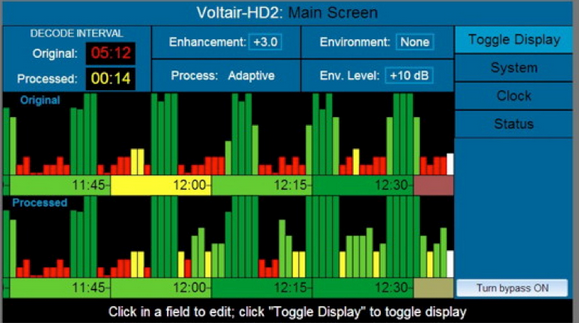 Hardware that increases the likelihood of encoded broadcast signals being detected by Nielsen’s portable people meters has become a new high-tech weapon in ratings battles in the largest markets, according to InsideRadio.

The box manufactured by Voltair gives a competitive advantage to only those stations that can afford its $15K price tag.  More than 300 units are in use, according to developer 25-Seven Systems, with adoption widespread in the top 10 markets.

Installed in a station’s audio chain, the box monitors and displays PPM encoding quality based on programming material.  Stations can simulate decoding quality in various listener environments and actively process their signals to optimize PPM encoding.

But its developer says it can help broadcasters be more confident that PPM panelists listening to their station are correctly measured.

Programmers using it say it has a direct impact on ratings, especially news, talk and sports stations. “The difference it makes with spoken word is like night and day,” says one major market user.

Media Confidential has learned that one of the big corporate owners is investing in the unit.  In one of its competitive markets, a unit was just installed in one of its News/Talk stations. In the first PPM-measured week the unit was being used, the station popped a full-share 25-54.

“It’s capturing people that were either too far away from the speaker and their meter couldn’t identify it or maybe it’s a soft-spoken talk show host and it doesn’t show up,” says another Voltair-equipped programmer told InsideRadio.

Stations with the box now adjust their audio to make it easier for meters to pick up the inaudible PPM codes, such as boosting the gain in softer portions of songs or not scheduling back to back straight-voice spots. Some use it in their production studios to make sure all the audio they put on the air will encode better.
Posted 3:34:00 AM