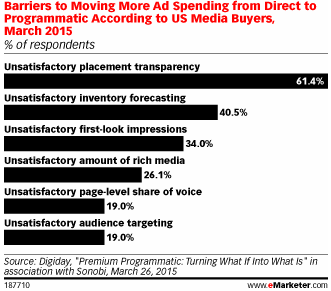 Programmatic spending is set for huge growth in 2015. According to US media buyers surveyed in March 2015 by Digiday in association with Sonobi, nearly nine in 10 said increasing programmatic ad spend would be a focus of their future digital ad strategy.

However, according to eMarketer, the industry still faces several hurdles before programmatic becomes universal, and quality control is one of the top areas for improvement.

Among respondents, 40.7% said there was a significant or very significant loss of control when purchasing ad inventory programmatically vs. direct, and an additional 43.3% said there was at least a moderate loss of control. Just 16% felt little to no control was lost. With quality concerns such as viewability haunting programmatic buyers, it makes sense that placement is critical too.

Nearly three-quarters (73%) polled by Digiday said placement transparency was essential in their decision to move more ad spend from direct to programmatic—the second-highest response, behind only audience targeting (86%) and well ahead of third-place inventory availability forecasting (44%).
Posted 7:28:00 AM