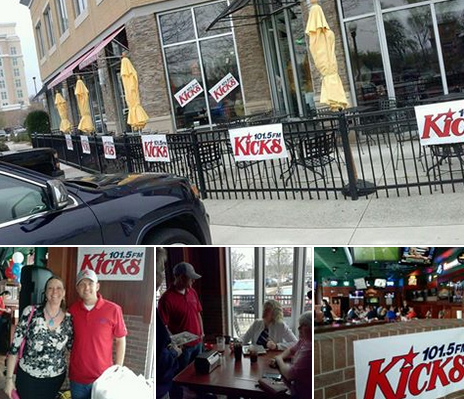 Christopher Sparkman was  gravely injured last year when a suicidal gunman opened fire at the Fed Ex store where Sparkman had been working as a security guard. Since then, he has had over 30 surgeries and he and his wife, Jamie Lynn, are facing huge medical bills.

To help the family with these medical expenses, KICKS 101.5 partnered with Atlanta area T. Mac restaurants on Thursday, April 2, and raised over $6,500 for the Sparkman family, with restaurants still reporting numbers from the drive. From 11am to 7pm, KICKS 101.5 was on hand at T. Mac’s Kennesaw location, broadcasting and meeting with listeners. During that time, all Atlanta area T. Macs participated in "A Day For Christopher". Each location had a drop box placed at the front for patrons to drop their receipts. 10% of all receipts collected will go to the Sparkman’s.

In a note to station staff Friday, Greg Frey, Program Director - WKHX, KICKS 101.5 Atlanta, said: "Thanks to Cadillac Jack and Tug who spent a good chunk of their day onsite and on the air. Also, kudos to Jenn Fallin, Matt Jones, Liz Weber and Doug Sargent for making this whole thing possible. Lastly, a big thanks to Joyce Murray who first made us aware of the Sparkman’s and their struggles. In the end, a family is helped by our loyal listeners and a great client."
Posted 3:01:00 AM