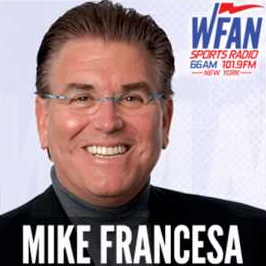 The ceremony will take place at a special luncheon during the Association’s summer conference at the Waldorf Astoria in New York City on Friday, June 13 and will also celebrate five other deserving broadcasting legends who will be inducted into the Hall of Fame alongside Francesa.

Francesa, whose name is synonymous with New York sports, can be heard on his program, Mike’s On, weekdays on WFAN  from 1:00 – 6:30 p.m.  In addition, Francesa hosts the nationally syndicated Mike Francesa’s Football Sunday radio program, which will enter its 28th season next fall.

“I’m humbled and excited to be recognized by the New York State Broadcasters Association,” said Francesa.  “It is a great honor, and anything with New York attached to it means all the more to me.

Francesa has for more than 25 years been the on-air cornerstone of WFAN, the nation’s first all-sports talk radio station launched in July 1987.  Since 2008, Francesa has hosted his own afternoon show, Mike’s On, on WFAN.  From 1989 to 2008, he had a critically acclaimed on-air partnership with Chris “Mad Dog” Russo, who together co-hosted the Mike and the Mad Dog Show.  In 2000, the Francesa/Russo duo became the first sports-talk hosts ever to win the Marconi Award for Major Market Personality of the Year, an award Francesa received again in 2012.  He was the first sportscaster to ever earn radio’s biggest honor more than once.
Posted 3:43:00 AM