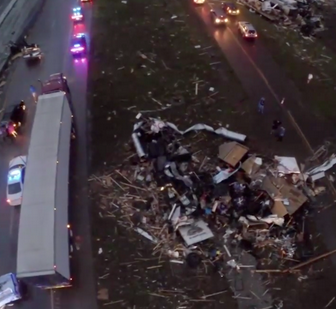 Storm chaser and videographer Brian Emfinger used a drone to document the aftermath of a tornado that ripped through Arkansas.  And according to Forbes, that video prompted speculation as to whether the FAA was going to investigate or even fine Emfinger for using the drone.  The Arkansas Democrat-Gazette is reporting that the FAA is investigating the use of drones to gather aerial footage in Arkansas.   FAA investigations and enforcement actions against drone journalists raise serious First Amendment questions about the agency’s ability to infringe upon press freedom in the absence of formal rules.

According to the article, The Federal Aviation Administration currently prohibits the commercial use of the devices, including for reporting, according to the agency’s website. But some photographers who fly small drones say a recent court case voids the federal regulators’ authority over unmanned aircraft.

Asked Monday about KATV’s use of a drone for its coverage of the tornado, FAA spokesman Lynn Lunsford said, “We are looking into it.”