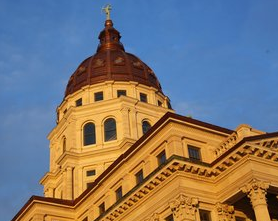 UPDATE Friday 5/2/2014:   A state grant of $600,000 for Kansas public TV and radio stations has been preserved in a budget agreement reached Thursday by House and Senate negotiators.

The money is the same amount allotted in the current year, but down from the $3.8 million the state provided as recently as 2008.

A 40-year history of state subsidies for public broadcasting in Kansas could evaporate when lawmakers return to Topeka this week, according to the Kansas City Star.

At one point in recent years, Brownback wanted to wipe out the funding completely. This year, the Kansas House wants to end the subsidies.

The budget fight reflects both an increasingly tight state budget and conservative lawmakers’ reluctance to underwrite what they see as left-leaning media.

Supporters of the subsidy think the public broadcasting funding is in real peril.

“I’m worried about it,” said Rep. Don Hineman, a western Kansas Republican who wants to preserve funding for public broadcasting.

A growing number of lawmakers find public broadcasting easier to cut amid the search for money to pay for schools, social services, public safety and roads.

“I don’t care if PBS exists,” said Rep. Virgil Peck, a Republican. “I’m just not in favor of taxpayer dollars going to fund something that can do its own fundraising and competes against private industry.”