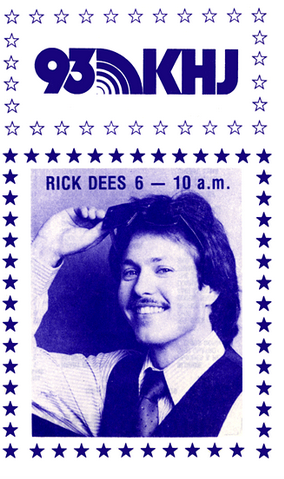 Dees began his radio career at WGBG, a Greensboro, NC radio station, while still in high school. He worked for various radio stations throughout the southeastern United States, including WXYC in Chapel Hill, North Carolina, WSGN in Birmingham, Alabama, and WKIX in Raleigh, North Carolina.

His introduction to the international entertainment arena began while working at WMPS AM 680 ("The Great 68") in Memphis, Tennessee, during the disco craze of the late 1970s, when he wrote and recorded "Disco Duck", the award-winning hit that sold more than six million copies.

Dees was fired from WMPS when he mentioned that his song, "Disco Duck" was almost #1 and his own radio station would not let him play it. The station manager said it was a conflict of interest. Dees did not perform the actual duck vocals on the song since he could not "talk like a duck."

The duck vocals were recorded at Shoestring Productions in Memphis, TN by Ken Pruitt. Pruitt moved away before the song became popular and the vocals for the duck were done by Michael Chesney of Memphis for the concert tour. Chesney had done some comedic voices for Dees prior to Disco Duck. The tour went from Disney World to New York, NY billed as Rick Dees and The Cast of Idiots."


After a 45-day non-compete clause in his contract was satisfied, Dees was hired by RKO Radio to do the morning show at WHBQ 560 AM in Memphis.

The success of Dees at their Memphis radio station, combined with his TV appearances and hit music, motivated station owner RKO General to offer Rick the morning radio show in Los Angeles at 93KHJ AM. Dees helped their ratings, but AM music radio was rapidly losing ground to FM.

When KHJ switched to country music, Rick Dees left KHJ, taking a morning position at KIIS-FM in July 1981. In a short time, he turned KIIS-FM into the #1 revenue-generating radio station in America, with an asset value approaching half a billion dollars.


Dees garnered many accolades, including Billboard Radio Personality of the Year for ten years in a row.
Posted 3:01:00 AM