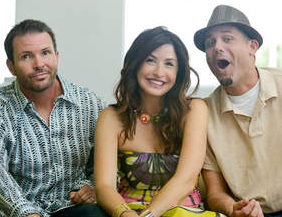 The KVJ Show, lured into the Miami radio market from West Palm Beach with great fanfare in August, has been canceled, according to Gossip Extra.

Within months, however, the Cox Media station 97.3 changed music format to Top-40 then changed the show to include an increasing amount of music.

KVJ was traditionally a talk show, and talk about the idiosyncrasies of life in South Florida took less and less importance on a show fronted by three well-paid personalities.

KVJ has been wiped out from the station’s website.

Meanwhile, The New York-based Elvis Duran and The Morning Show, which is syndicated nationally and cheaper to broadcast, is gathering momentum in KVJ‘s old time slot on Wild 95.5 FM.

One source close to Hits 97.3 said Rolston, Sinicki and Pennington were not fired, since they’re under contract, but they’ve been told they no longer need to show up at the station.