Lew Dickey, Chairman & CEO stated: "This quarter was marked by the accelerated integration of WestwoodOne. We now expect to complete the two-year integration approximately three quarters ahead of time and will exceed the stated synergies by 5-10%."

Operating highlights are as follows (in thousands, except percentages): 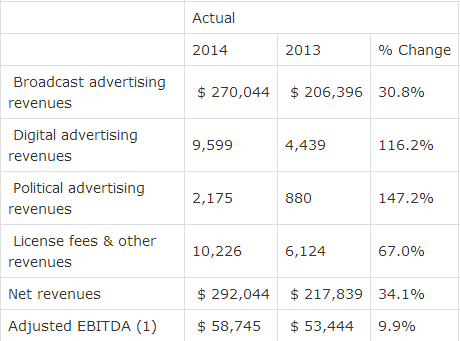 On an actual basis, net revenues for the three months ended March 31, 2014 increased $74.2 million, or 34.1%, to $292.0 million, compared to $217.8 million for the three months ended March 31, 2013. The increase resulted from increases of $63.6 million, $5.2 million, $1.3 million and $4.1 million in broadcast advertising, digital advertising, political advertising and license fees and other revenue, respectively. These increases were primarily attributable to the addition of the operations of WestwoodOne, which was acquired by the Company in December 2013.