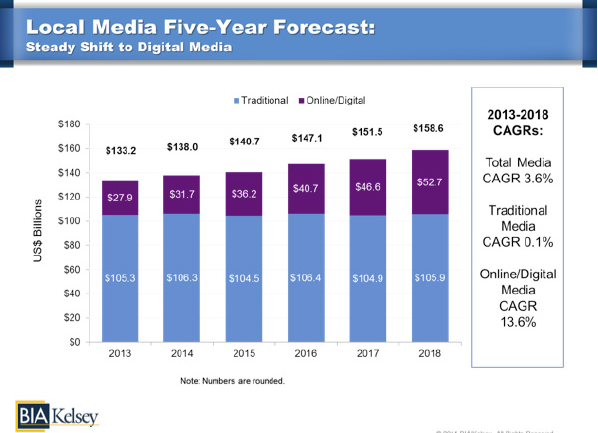 “While the U.S. economy is not expected to grow very quickly over the next few years, we estimate the overall local media market will grow faster than previously thought through 2018,” said Mark Fratrik, senior vice president and chief economist, BIA/Kelsey. “Based on positive trends in the overall local media marketplace, such as faster growth in online and mobile advertising, and the fact that national and local advertisers were slightly more aggressive in their advertising expenditures in 2013 than originally thought, we are optimistic on the entire industry's ability to grow advertising revenues.”

BIA/Kelsey expects revenue from traditional media, in aggregate, to slightly increase from $105.3 billion in 2013 to $105.9 billion in 2018 (CAGR: 0.1 percent). As expected, the political ad spend cycle contributes to a drop in revenues in odd-numbered years. Despite the year-over-year political advertising seesaw effect, traditional media revenues remain remarkably steady throughout the forecast period.

BIA/Kelsey analysts will present highlights from the forecast at the firm’s LEADING IN LOCAL: The National Impact conference, taking in Atlanta May 7-9. LEADING IN LOCAL is gathering senior executives from across the local media, advertising and marketing space, as well as brands, to examine how national's local play is having an impact on local media.
Posted 9:18:00 AM