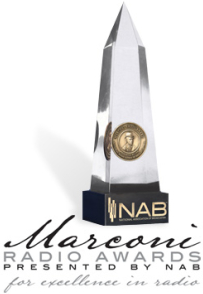 The National Association of Broadcasters (NAB) has announced it will accept nominations from NAB member radio stations between May 1 - 31 for the 25th NAB Marconi Radio Awards, which recognize overall excellence in radio broadcasting.

Winners will be announced during the NAB Marconi Radio Awards 25th Anniversary Dinner & Show, held September 11 at the Radio Show in Indianapolis.

Nominations must be submitted online by May 31. Finalists will be announced in July. Guidelines are available to help radio stations build strong entries.
Posted 11:51:00 AM