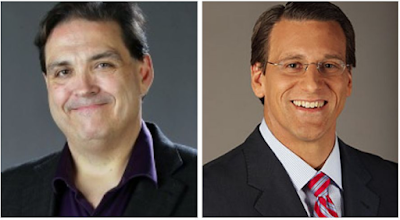 Bernie Miklasz (left) and Steve Savard, major St. Louis media figures who lost high-profile broadcasting jobs this year because of what was said to be coronavirus-fueled economic downturns at their stations, are set to return to the local airwaves to jabber about sports on KFNS 590 AM and give the station a roster of big-name sportscasters, reports stltoday.com.

Miklasz is the former Post-Dispatch sports columnist who moved full-time into radio in 2015 but was dropped from his sports-talk show at WXOS 101.1 FM in May. Savard, longtime sports director at KMOV Channel 4 before becoming a lead news anchor there seven years ago, was jettisoned in September. He also was the Rams’ radio play-by-play voice for their last 16 seasons in St. Louis.

Now they are bouncing back after having had to sit out for a period because of “non-compete” clauses in previous contracts.

John Hadley, who is running KFNS operations while a group he has assembled is in the process of buying the station, said “The Bernie Show” will air from 3-6 p.m. weekdays starting Monday. Then beginning Jan. 4, “Middays with Seve” will occupy the 1-3 weekday slot.

The arrival of those two will bolster the lineup of a station that already has well-known St. Louis sportscasters in place. Tim McKernan and Doug Vaughn are featured with others from 7-10 a.m., Frank Cusumano follows until noon then Cam Janssen and Charlie Marlow are on for an hour before Savard eventually begins at 1 p.m., leading into Miklasz, who also will be writing for Cardinals broadcaster Dan McLaughlin’s website (https://www.scoopswithdannymac.com). Charlie "Tuna" Edwards is on  in the evening.

Out in the afternoons will be a show that primarily features Hadley with others, as well as national programming that has been airing since Frank O. Pinion’s entertainment show was canceled in October to clear the way for KFNS to return to its sports-intensive roots.

Hadley is proud of the lineup he has gathered and indicated that the goal is to not only be stronger than WXOS 101.1 FM, the market’s other full-time sports station and the longtime local leader in that genre, but also AM stations that have a considerable sports presence — KMOX 1120 AM and KTRS 550 AM.