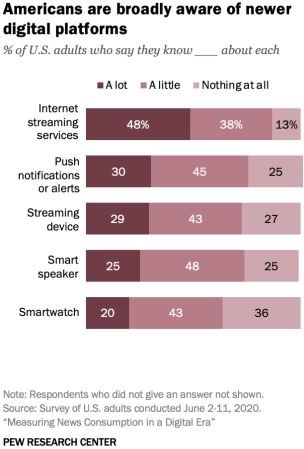 A transition to digital technologies has brought upheaval to the news media industry by way of a multitude of new providers and ways to get news.
Just as American news organizations have had to drastically reevaluate their business models, it would make sense that researchers who are trying to measure public news consumption need to reexamine the traditional methods they have used. A new Pew Research Center analysis explores how best to measure public news consumption – asking, which current survey practices work well and where might changes be in order?

This study took a multimodal approach to investigating these topics, drawing on cognitive interviews, split-form survey experiments, comparisons between passive data and self-reported survey data, and a full, nationally representative survey. First, 21 cognitive interviews were conducted through RTI International in late February and early March 2020 to obtain qualitative feedback on the public’s understanding of emerging concepts about news consumption in a digital age and inform the development of survey experiments. Second, split-form survey experiments were conducted to test different survey approaches to measuring news consumption, among 1,031 respondents April 17-19, 2020, and a further 1,018 respondents April 24-25, 2020, on Ipsos’ KnowledgePanel.

Third, the Center used passive data collected from 1,694 Ipsos KnowledgePanel members who consented to participate in the monitoring of their online activity. Researchers collected passive data on these panelists’ digital activity (such as which news websites and apps they visited) between May 16 and June 15, 2020, to compare with their responses to a survey fielded by Ipsos June 2-11, 2020. Finally, that June survey queried an additional nationally representative sample of 2,021 respondents on Ipsos’ KnowledgePanel about their awareness and use of different aspects of media and news.