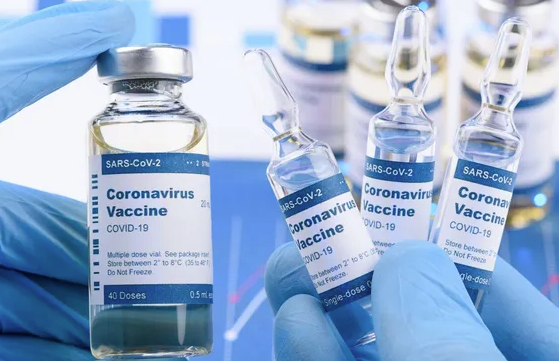 The U.S. had more than 3,000 deaths in one day from the coronavirus for the first time since the pandemic began on Wednesday, according to The Covid Tracking Project, which reported 3,054 deaths. It also said there were 210,000 new confirmed cases and a record 106,688 hospitalized Covid-19 patients, as hospitals continue to be stressed by the rising case load, with some at or beyond capacity, as the fall and winter surge continues to expand.

Hospitals are preparing for a high-stakes COVID-19 vaccine rollout — and there's little room for error.

"We've never done anything like this as a country or in the world, as significant as this exercise is," one hospital executive said.https://t.co/qkMAa7fbR7

Meanwhile, the Food and Drug Administration’s vaccine advisory panel will be meeting today to look at the data on Pfizer's coronavirus vaccine, and it's expected hey will advise the FDA to approve emergency use, meaning people could begin to be vaccinated within days of that happening, with health care workers and those in nursing homes and other health care facilities to get the shots first. In one reported snag, however, officials in the U.K., which began giving people the vaccine earlier this week, are saying that people with a history of serious allergic reactions shouldn’t get the vaccine, at least for now, as they're investigating two reports of allergic reactions that occurred.


➤FED GOV'T., 48 STATES SUE FACEBOOK, ACCUSE MARKET POWER ABUSE TO CRUSH SMALLER COMPETITORS: The federal government and 48 states and districts sued Facebook yesterday, charging that it abused its market power to crush smaller competitors. The landmark antitrust lawsuits announced by the Federal Trade Commission and New York Attorney General Letitia James seek remedies that could include forcing Facebook to spin off Instagram and WhatsApp. The FTC said Facebook had used a, quote, "systematic strategy" to eliminate competition, including buying small but growing rivals like Instagram in 2012 and WhatsApp in 2014. Facebook noted that the FTC cleared both acquisitions at the time, and called the government actions "revisionist history." This latest antitrust action against Big Tech comes after the Justice Department sued Google in October for abusing its dominance in online search and advertising.


➤BOEING 737 MAX PLANES RETURN TO SKIES FOR FIRST TIME IN NEARLY TWO YEARS: Boeing 737 Max planes returned to the skies yesterday for the first time since they were grounded around the world nearly two years ago following two crashes that killed everyone on board within a matter of months. The first flight was by Brazil's Gol Airlines, which used a 737 Max 8 on a flight from Sao Paulo to Porto Alegre. The planes were grounded in March 2019, soon after an Ethiopian Airlines 737 Max crash that was five months after a Lion Air crash in Indonesia that also was a 737 Max. A total of 346 people were killed in both crashes. A problem with the 737 Max's flight stabilization system was blamed, and Boeing upgraded the safety systems and software before getting approval to fly again. 737 Max flights in the U.S. are expected to begin again soon, likely by the end of the month.


➤POLL: 54 PERCENT WANT TO CONTINUE WORKING FROM HOME: A new Pew Research Center poll out yesterday found that more than half, 54 percent, of Americans who are working from home because of the pandemic would like to be able to continue to do so all or most of the time after the pandemic is over. A majority of those who've been working from home said that transition hasn't been a problem, saying that it's been easily to meet deadlines and work without interruptions, and that they have access to the technology, equipment and workspace that they need. However, half of parents with kids under age 18 say it's been difficult to get work done without interruptions, compared to just 20 percent of workers with older children or no children.
🏈BIG TEN CLEARS WAY FOR OHIO STATE TO PLAY NORTHWESTERN FOR TITLE: The Big Ten Conference yesterday dropped its six-game minimum requirement for the league championship game, clearing the way for Number 3 Ohio State to play Number 15 Northwestern for the conference title on December 19th. Ohio State finished the regular season with only five games after Michigan had to pull out of Saturday’s game because of positive coronavirus tests. The Big Ten had said before the season that teams would have to play six of their eight scheduled games to qualify for the championship game. Ohio State has missed three games because of pandemic issues.

🏈LSU SELF-IMPOSES BAN ON BOWL GAME PARTICIPATION: LSU announced last night  that it won't participate in any bowl games this season, a ban that's part of its own self-imposed sanctions resulting from the NCAA's investigation into improper booster payments to its football players. LSU is currently 3-5 with two games left, but could still have been eligible for a bowl game if they finished under .500 because of changes made this year due to the pandemic. LSU has also self-imposed a loss of eight scholarships over two years and a reduction in recruiting visits, evaluations and communication.

🏈BRONCOS' BOUYE SUSPENDED FOR SIX GAMES FOR PED VIOLATION: Denver Broncos cornerback A.J. Bouye has been suspended for six games for violating the NFL’s policy on performance-enhancing substances. Denver's KOA radio reported that Buoye received the supplement from the same medical professional that led to two Houston Texans getting suspended for six games last week, who'd said they'd been assured it was safe. But instead it contained a banned substance.

The quarterback for the University of Nevada, Las Vegas, has apologized for eating sushi off a nude model during an episode of the Bravo reality show 'Below Deck.' https://t.co/TRdTFUis88


🏀ABDUL-JABBAR REVEALS HE HAD PROSTATE CANCER: NBA great Kareem Abdul-Jabbar revealed yesterday that he had prostate cancer. The disclosure came in an article he wrote for WebMD about health risks faced by Black people. The 73-year-old NBA career scoring leader didn't give further details in the article, in which he also said he had heart bypass surgery. Abdul-Jabbar said he'd been able to get better care than many Blacks, in part because of his celebrity and also because two sons work in the health care field. Abdul-Jabbar was also diagnosed with chronic myeloid leukemia in 2008.

⚽MLS MARKS 25TH ANNIVERSARY: Major League Soccer is celebrating its 25th anniversary this year, and it marked the milestone yesterday with the release of the MLS 25 Greatest players. Among the former players on the list are Cobi Jones, Landon Donovan, David Beckham, Clint Dempsey and Robbie Keane. The anniversary came during this coronavirus-affected year in which MLS suspended the season in March after teams had played just two games. The league returned in the summer to play an abbreviated season, which will end this Saturday with the MLS Cup final between the Columbus Crew and Seattle Sounders.
Posted 4:32:00 AM