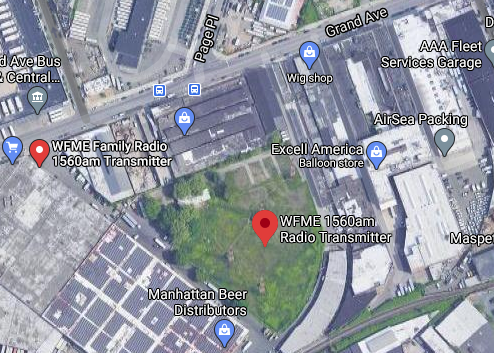 Look no further than the recent $51 million sale of a five-acre parcel in Queens, N.Y., where an AM radio station will eventually abandon its existing tower and transmitter site, and move it.

This property is situated near the Long Island Expressway, the Brooklyn-Queens Expressway, the Queens-Midtown Tunnel, and La Guardia and JFK airports. The spot’s current value as a logistics hub far outstrips its importance to a broadcast outlet that didn’t register in New York’s most recent radio ratings book.

The rising value of these locations is being driven by changing consumer habits and rapid technological evolution. Sites on the edge of town that in radio’s heyday were cheap and plentiful can now house vital links in a supply chain propelled by technology that was hard to imagine back in AM’s early days.

Elon University journalism professor Richard Landesberg told Transport Topics most AM station owners know their transmitter sites are worth more than the licenses for their stations — licenses that, as a practical matter, are issued by the FCC and are not technically owned by licensees.

FCC data shows that since 2000 nearly 400 AM stations have ceased operations. The trend has accelerated during the COVID-19 pandemic — nearly 80 stations have gone silent this year.

Broadcast groups such as iHeartMedia have sold or leased hundreds of transmitter and tower sites to privately owned tower management companies, including Boca Raton, Fla.-based Vertical Bridge. These companies are either developing the real estate or, in some cases, building lucrative cellular antennas.

Another broadcast group, Cumulus Media, which emerged from bankruptcy protection in 2018, has been looking to sell its transmitter sites to capitalize on the high real estate prices.

The owners of WBBM 780 AM/105.9 FM — the top-rated station in Chicago — in 2018 sold the station’s 42-acre transmitter site near O’Hare International Airport to Bridge Development Partners for $46 million. The 695-foot antenna and a smaller backup unit had been in use since 1942, but now a 750,000-square-foot logistics and warehouse complex is being developed on the site.

Technology also is making it easier to relocate AM transmitters. While stations previously needed their own transmitter sites, engineering improvements now permit more than one station on a single antenna. WBBM now shares an antenna with another station in its ownership group, and WFME likely will do the same thing.