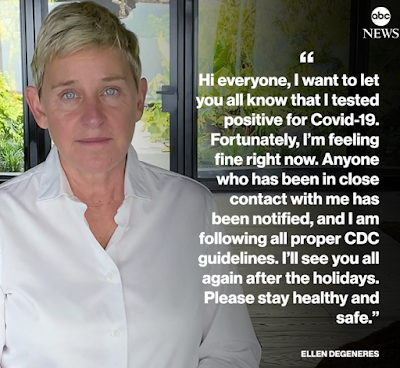 Ellen DeGeneres has tested positive for COVID-19, and production on her talk show will be paused until January.

A spokesperson confirmed production would be halted until January. The past seven days have been its deadliest of the pandemic, and there were more than 30,000 new infections for the third straight day.

2020 has not been kind for the host.  The year has included an internal investigation after allegations of racism, sexual misconduct and other workplace problems. Three top producers were fired after staff raised complaints about poor communication, pay reductions and mistreatment.

The shutdown comes as ratings hit their highest rating since May during the week as part of the show’s annual “12 Days of Giveaways” series.

"Ellen" is the No. 3 syndicated talk show behind Live With Kelly and Ryan and Dr. Phil.