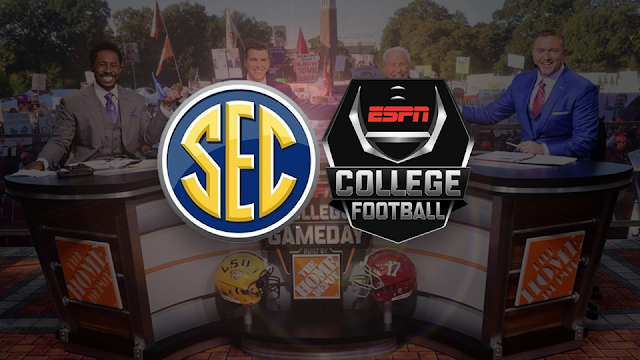 Disney’s ESPN has finalized a deal to buy the rights to college football’s most-watched television package for $300 million per season—at least five times the $55 million per year fee that current rights holder CBS pays the conference, Sportico confirmed. ESPNs expected purchase was first reported in December of 2019 when talks began, but sorting through legal issues amid a pandemic slowed the process.

The SEC and ESPN made the announcement official Thursday afternoon during Disney’s 2020 Investors’ Day event.

CBS’ current SEC package gives it the rights to the conference’s best game each week and the Conference Championship Game, which last season averaged 13.7 million viewers and a 7.9 household rating, making it the No. 2 regular-season college football game behind only CBS’s Nov. 9 broadcast of the Alabama-LSU game (16.6 million viewers/9.7 rating). The LSU-Georgia title tilt was the most watched conference championship of the season and generated a staggering $22.3M in advertising revenue for CBS, with individual 30-second units fetching as much as $330,000 a pop, per Standard Media Index data.

CBS is on course to have aired the top-rated and most lucrative college football package for 12 years running. Three of the five most valuable teams in terms of ad revenue generated in 2019 were in the SEC (LSU, Auburn and Alabama).

ESPN’s 10-year, $3 billion deal for the expanded rights package will pay the SEC about $20 million for each Game of the Week telecast and substantially up its media revenues. Disney also is the controlling stakeholder in the SEC Network, owning 80% of the joint venture. Hearst claims the remaining 20% in a structure that mirrors the ownership split in ESPN. With ownership of the conference’s network as well, ESPN will now own the rights to all SEC football games.