The AM Rundown: Report..Trump Admin Passed On Early Vaccine Offer 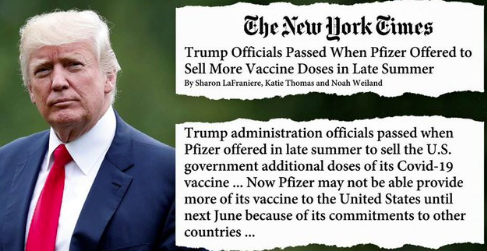 The Trump administration passed on the chance over the summer to lock in an order for millions more doses of the Pfizer coronavirus vaccine, and now a second delivery from them may not be available until next summer, as Pfizer fulfills orders from other countries, the New York Times reported Monday.
Pfizer’s vaccine, which trials have shown to be 95 percent effective, is expected to be approved by Food and Drug Administration advisers as soon as this week. A delivery of 100 million doses, which is enough for 50 million Americans since two shots weeks apart is required, will be coming in the next months, with people expected to begin being vaccinated by the end of the year. Health care workers and those in nursing homes and long-term care facilities will be first in line.
The administration's contract with Pfizer committed it to buy an initial 100 million doses, with the option to buy as many as five times more. The Times report says that the White House this summer decided against locking in another 100 million doses for delivery in the spring of next year. The White House denied the report yesterday, and said that between the Pfizer vaccine and another from Moderna with similar effectiveness that's also expected to get emergency FDA approval this month, as well as with others coming, any American who wants the vaccine will be able to get it by the end of June next year.

Margaret Keenan, 90, has become the first person in the world to receive the Pfizer COVID-19 vaccine outside of a trial following its rapid clinical approval https://t.co/gE1RtgWcYE pic.twitter.com/MK3mi7PF0a

U.K. Begins Vaccinating: The U.K. began vaccinating people today, with the first 800,000 doses to be going to people over 80 who are either hospitalized or already have outpatient appointments scheduled, as well as nursing home workers. Britain is the first in the world to administer the Pfizer vaccine after the country's regulators gave emergency authorization on December 2nd.


➤GEORGIA RECERTIFIES ELECTION WIN FOR BIDEN AFTER SECOND RECOUNT: Georgia Secretary of State Brad Raffensperger on Monday recertified election results showing that President-elect Joe Biden won the state and its 16 electoral votes after the completion of a recount requested by President Trump. It's the second recount in Georgia, after a hand recount was first done because of the closeness of the result. Biden's final margin of victory was less than 12,000 votes. Raffensperger said during a news conference, "We have now counted legally cast ballots three times, and the results remain unchanged." Trump's attorneys have filed dozens of failed legal challenges to the vote count in several states, including Georgia, as the president continues to make baseless claims of widespread voter fraud. Trump has also criticized Raffensperger, who's a Republican, as well as Republican Governor Brian Kemp for not taking actions he believes could help him change the outcome of the election in the state. But Raffensperger has defended the integrity of Georgia's election, and Kemp has said he has no power to intervene in elections.


➤BIDEN REPORTEDLY TO CHOOSE RETIRED GENERAL LLOYD AUSTIN AS DEFENSE SECRETARY: President-elect Joe Biden will nominate retired four-star Army general Lloyd J. Austin to be secretary of defense, according to media reports Monday.
If he's confirmed by the Senate, the 67-year-old would be the first Black defense secretary. There's likely to be some opposition to naming a career military officer instead of a civilian to head the Pentagon, and he would in fact need a congressional waiver since a recently retired military officer -- out of uniform for less than seven years -- is barred from holding the position to ensure civilian control of the military.
Only two career military officers have been defense secretary, George C. Marshall and James Mattis, who was President Trump's first defense secretary, and who had to himself get a congressional waiver. Austin is a West Point graduate who served in the military for 41 years before retiring in 2016.
👌TRUMP SAYS COVID-STRICKEN GIULIANI 'DOING VERY WELL': President Trump said Monday that Rudy Giuliani was, quote, "doing very well," after tweeting the day before that his personal attorney and former New York City mayor had tested positive for the coronavirus. If was reported later Sunday that the 76-year-old Giuliani had been hospitalized at Georgetown University Medical Center in Washington, D.C. and was experiencing symptoms. Trump told reporters yesterday that he'd spoken to Giuliani, stating, "Rudy’s doing very well. I just spoke to him. No temperature."

😷'ESSENTIAL WORKERS' TOP READER'S POLL FOR 'PERSON OF THE YEAR': Essential workers, the health care workers, delivery people, grocery store employees and others who continue to risk their lives by working amid the coronavirus pandemic and keeping the country functioning, were the winners of Time's reader poll for 2020 Person of the Year. Essential workers got 6.5 percent of the more than eight million votes cast in this year's poll that asked to choose the person or group of people who had the greatest influence on 2020.
Coming in second with five percent of the vote was Dr. Anthony Fauci, director of the U.S. National Institute of Allergy and Infectious Diseases and a member of the White House coronavirus task force, who emerged as a trusted figure for information on the pandemic.
Firefighters were third with 4.3 percent of the vote, for their dangerous work battling historic wildfires in places including the western U.S. and Australia.
In fourth place with four percent of the vote were the Black Lives Matter activists who led and inspired nationwide and global demonstrations against systemic racism and police brutality after the police killings of George Floyd and several other Black Americans, including Breonna Taylor.
President-elect Joe Biden, who beat President Trump in Trump's re-election bid, was fifth with 3.8 percent of the vote.

Cardi B asked fans if she should spend $88,000 on a purse. After backlash, she offered to match charitable donations. https://t.co/yzQtC9x65R

🎅PARENTS ARE DESPERATE—‘ZOOM SANTAS’ ARE CASHING IN: Being a Santa or Mrs. Claus actor is rough this year in one sense—as interactions with the characters have changed drastically. Some are suiting up and offering visits from behind plexiglass, but others are suiting up and making video calls.
Don White, age 79, and Mary Rogers, age 73 are two of many actors who have taken their job digital this year, and White says they’re “expecting to triple or quadruple our income this season.” He adds, “We went from not thinking we’d be busy at all this year to being busier than ever; we started earlier, before Thanksgiving, too. Parents are desperate to find entertainment and something for their kids to do.” Mary’s son, Josh, runs VisitFromTheClauses.com, connecting the actors with their clients.
Some bigger companies have employed a similar tactic this year, including Macy’s and Sam’s Club—with the latter offering free chat sessions with Santa for its paying members. Cherry Hill Programs, one of the largest providers of Santas in more than 700 shopping malls across the US and Canada, is also offering high-production Zoom calls with Santa via CreateHolidayMagic.com. Another organization, Santa’s Club, just launched in July, and the successful company has about 60 employees, and dozens of Santas—who can earn up to $40 an hour. The company has lots of positive reviews and even uses its own video chat tool (as opposed to Zoom or Skype) and is aiming to be an early leader in virtual visits with Santa.


🏈STEELERS NO LONGER UNDEFEATED, BEATEN BY WASHINGTON 23-17: The Pittsburgh Steelers are no longer undefeated, losing to Washington 23-17 on Monday in their 12th game of the season. Washington came back from being down 14 points in the second quarter to get the win. They scored a tie-breaking field goal with 2:04 left, and then kicked in another field goal after Steelers quarterback Ben Roethlisberger was picked off by Jon Bostic with 1:59 remaining.

🏈BILLS BEAT 49ERS 34-24: The Buffalo Bills defeated the San Francisco 49ers 34-24 last night, led by quarterback Josh Allen, who threw for 375 yards and four touchdown passes. It was the fourth game of the season for the 24-year-old Allen with at least 300 yards passing and three touchdowns, setting a new franchise record.

🏈JETS FIRE WILLIAMS AFTER DEFENSE CALL COST SEASON'S FIRST WIN: The New York Jets fired defensive coordinator Gregg Williams on Monday (December 7th) after a defense call at the end of Sunday's game against the Las Vegas Raiders cost the Jets what would have been their first win of the season. Williams was widely criticized for calling an all-out blitz with the Jets seconds away from winning. Raiders quarterback Derek Carr threw a 46-yard touchdown pass to Henry Ruggs III, who was in man-to-man coverage with rookie cornerback Lamar Jackson, with five seconds left, giving Las Vegas a 31-28 win.

🏈OLE MISS-TEXAS A&M GAME CANCELED OVER POSITIVE CORONAVIRUS TESTS: The college football matchup between Ole Miss and Number 5 Texas A&M that was scheduled for Saturday has been canceled because of positive coronavirus tests in Ole Miss' program. If the game isn't able to be rescheduled, it will be deemed a no-contest. Ole Miss has suspended team activities, and they won't resume until at least Friday.

🏆TRUMP HONORS LEGENDARY WRESTLER/COACH GABLE WITH MEDAL OF FREEDOM: President Trump on Monday presented the Presidential Medal of Freedom, the nation's highest civilian honor, to legendary Iowa wrestler and coach Dan Gable, who won a gold medal at the 1972 Munich Summer Olympics. Trump said during the White House ceremony, "He’s the greatest wrestler, probably ever. He's made our country very proud and he’s a true GOAT." Gable was a champion wrestler at Iowa State University, and had a very successful coaching career at the University of Iowa, where his teams won 15 NCAA titles. 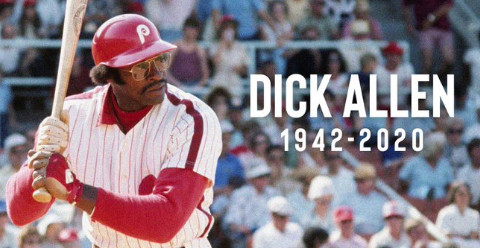 ⚾SEVEN-TIME ALL-STAR DICK ALLEN DEAD AT 78: Seven-time All-Star Dick Allen, who was the 1964 National League Rookie of the Year and the 1972 American League MVP, died on Monday after a lengthy illness. He was 78. The Philadelphia Phillies, who Allen played for during the first seven years of his 15-year career and then two more years towards the end of it, retired his Number 15 in September. Allen, who played first base, third base and left field, also played one season each with the St. Louis Cardinals, L.A. Dodgers and Oakland A's, and three seasons with the Chicago White Sox, with whom he won the 1972 MVP.
Posted 4:24:00 AM