The Facebook-owned social media apps went down at around 09.30 GMT, according to the website Downdetector, which monitors online outages.

Users are unable to send messages and are being flashed an error message which says the app is 'waiting for network'. 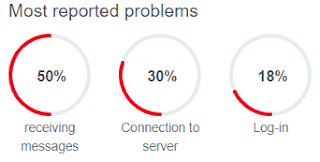 More than half (52 per cent) of reported issues with Messenger are related to sending and receiving messages whereas the main Facebook site's biggest reported problem is total blackout, accounting for 41 per cent of problems.

It is currently unknown what is causing the issue and how long it will last. Not all users are affected.

'We are aware that some people are having trouble sending messages on Messenger, Instagram and Workplace Chat,' a Facebook spokesperson told MailOnline.

'We're working to get things back to normal as quickly as possible.'

Facebook's private messaging app, Messenger, appears to be facing the most significant issues, with the majority of reports coming from the UK and Europe.

Instagram and Facebook are experiencing complaints in the hundreds, but Messenger is suffering thousands, according to Downdetector.