The AM Rundown: Coronavirus Vaccines On The Way 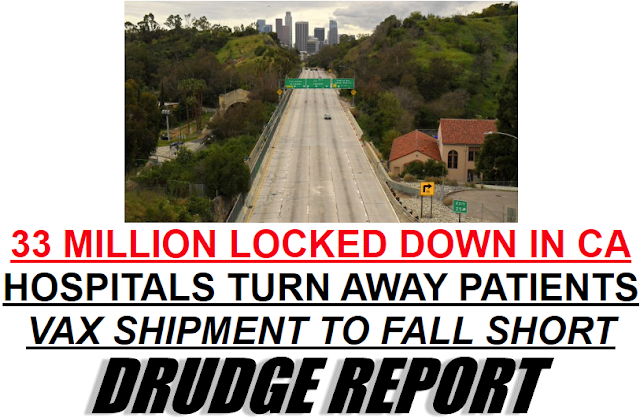 EXPERTS WARN TO FOLLOW GUIDELINES WITH TOUGH WEEKS AHEAD: The good news about the first two coronavirus vaccines being very effective has given everyone hope and let them finally see the light at the end of the tunnel. But health experts are warning that before we get to a point next year when vaccines will be more widely available, we're going to first go through a tough time for many weeks, with the fall-winter surge continuing to expand. They say that means we need to continue to follow the guidelines of wearing masks, social distancing, and other basic measures. White House coronavirus response coordinator Dr. Deborah Birx said on NBC's Meet the Press yesterday, "The vaccine’s critical. But it’s not going to save us from this current surge. Only we can save us from this current surge."


As of early this morning, more than 282,300 people have died from the coronavirus in the U.S., and deaths amid the ongoing surge have risen to a daily average of more than 2,100, a level not seen since April, when New York City was the epicenter of the U.S. outbreak. Hospitals across the country are being stressed, with the number of hospitalizations now at more than 101,000 and breaking records daily. Former FDA Commissioner Dr. Scott Gottlieb had a stark warning on CBS' Face the Nation yesterday that the death toll could be nearing 400,000 by the end of January, saying, "As bad as things are right now, they’re going to get a lot worse."

➤CORONAVIRUS RELIEF BILL LIKELY, BUT WON'T INCLUDE ANOTHER $1,200 PAYMENT TO AMERICANS: It's looking likely that Congress will pass a new $908 billion coronavirus relief bill that Senate Majority Leader Mitch McConnell will agree to and President Trump will sign, but it won't include a second round of $1,200 payments to Americans, Republican Senator Bill Cassidy said yesterday. Cassidy, who's involved in the bipartisan talks on the proposed legislation, said on Fox News Sunday, "The pain of the American people is driving this, and I’m optimistic that both those leaders will come on board." The proposed measure set to be released today would include some $300 in extra federal weekly unemployment benefits, give a second round of funds through the Paycheck Protection Program for small businesses, and extend a freeze on evictions for people who can't pay their rent. The $908 billion plan represents a compromise on both sides, at less than half of the $2.2 trillion the Democrats had earlier proposed and nearly double the $500 billion package put forward by McConnell.

My Dad @RudyGiuliani is resting, getting great care and feeling well. Thank you to all the friends who have reached out concerned about his well being. https://t.co/0FVceiNnHc


➤GIULIANI HOSPITALIZED AFTER TESTING POSITIVE FOR CORONAVIRUS: President Trump's personal attorney, Rudy Giuliani, has tested positive for the coronavirus, with Trump tweeting the news on Sunday afternoon. The 76-year-old former New York City mayor was experiencing symptoms and was reportedly admitted yesterday to Georgetown University Medical Center in Washington, D.C. Giuliani tweeted last night: "I’m getting great care and feeling good. Recovering quickly and keeping up with everything." Giuliani has been traveling to key swing states as part of his efforts to try to overturn Trump's election loss. In them, he's met with officials and appeared in at least one hearing maskless.

➤BIDEN CHOOSES CALIFORNIA AG BECERRA TO BE HEALTH AND HUMAN SERVICES SECRETARY: President-elect Joe Biden has reportedly chosen California Attorney General Xavier Becerra to be secretary of the Department of Health and Human Services, where he'll have a leading role in overseeing the Biden administration's coronavirus response. Becerra, a former House Democrat, was involved in steering the Affordable Care Act through Congress in 2009 and 2010, and as California's attorney general has led the coalition of Democratic states defending the law, also known as Obamacare, from the Trump administration's latest attempt to overturn it, a case that was recently heard by the Supreme Court. If confirmed, he will be the first Latino to head HHS.

Migraines, dizziness, memory loss and other ailments that dozens of U.S. diplomats have complained of while serving in Cuba and China “are consistent with the effects of directed, pulsed, radiofrequency energy,” a new report finds.https://t.co/eaT8M4k7gi


➤REPORT: MICROWAVE ENERGY LIKELY MADE U.S. DIPLOMATS MYSTERIOUSLY SICK IN CUBA, CHINA: A new report by a National Academy of Sciences committee has an explanation for a mysterious illness that has struck U.S. diplomats in Cuba and China, concluding that directed microwave energy was the likely cause. Cases of the illness first surfaced in late 2016 among U.S. diplomatic personnel in Havana, Cuba, with symptoms including intense head pressure, dizziness and cognitive difficulties. Some reported hearing high-pitched sounds similar to crickets. The study didn't suggest a source for the microwave energy or say whether it was an attack. However, it noted that previous research on this type of injury was done in the former Soviet Union.

➤INAUGURATION CEREMENT LIKELY TO BE SCALED DOWN: President-elect Joe Biden's inauguration on January 20th is expected to be different than normal because of the pandemic, with the ceremony itself and all the festivities scaled down. Biden on Friday spoke about the plans, saying that many details still aren't settled, but that his transition team is speaking with those who helped organize the Democratic National Convention, which was held almost entirely virtually. He said, for instance, that it's, quote, "highly unlikely" huge crowds of people will be encouraged to gather on the National Mall for the swearing-in, and stated, "My guess is that there probably will not be a gigantic inaugural parade down Pennsylvania Avenue." Instead, he said there likely will be, quote, "a lot of virtual activity in states all across America." Biden taking the oath will almost certainly be in person, but there will likely be fewer people on the platform outside the U.S. Capitol, who'll be more spread out and required to wear masks. Inaugural balls may also either not be held, or be reimagined in some way, possibly including a virtual component.

➤RS STILL HASN'T PROCESSED ON MILLION PAPER TAX RETURNS: If you filed your tax returns this year using a paper form and are due a refund that you still haven't gotten all these months later, that's something else you can blame on the coronavirus. The Motley Fool reports that the IRS still hasn't processed an estimated one million paper tax returns, after a backlog was created when it closed its offices earlier this year at the start of the pandemic in the U.S. In a normal year, it still usually takes longer to process returns that are filed on paper, with it taking about an average of six weeks to get a refund compared to three weeks for returns filed electronically. The good news for paper filers who are still waiting on a refund is that the IRS has said it will pay interest on the overdue refunds. The IRS hasn't given an estimate of when it will get through the backlog of paper returns.

Tracking footage from a helicopter of today’s Falcon 9 launch off LC-39A pic.twitter.com/7rYVZRTS18


➤SPACEX SENDS SUPPLY SHIP TO SPACE STATION WITH CHRISTMAS GOODIES: SpaceX launched a new version of its Dragon supply ship to the International Space Station yesterday (December 6th), which has Christmas treats and presents among its cargo. The food being sent to the astronauts for the holiday includes roast turkey, cornbread stuffing, cranberry sauce, shortbread cookies and icing. The Dragon, which should reach the space station today, will join another Dragon in orbit that delivered four astronauts to the outpost last month. It will be the first time two SpaceX capsules will be in orbit at the same time.

➤UNEXPLODED 1,100 BOMB FROM WORLD WAR TWO FOUND IN GERMANY: An unexploded 1,110-pound bomb from World War Two was found at a construction site in Frankfurt, Germany. Explosive experts were able to disarm and dismantle the bomb in about two hours yesterday (December 6th), three days after it was found. While the process took place, some 13,000 residents were evacuated and mass transit was stopped in the area. Finding unexploded bombs from World War Two is not that uncommon of an event in Germany.

For a look at the NFL Playoff Picture, let's go to the touchscreen with @SteveKornacki from @NBCNews! pic.twitter.com/CHkA17cO6D


🏈SAINTS, CHIEFS FIRST TO CLINCH PLAYOFF SPOTS: The New Orleans Saints and Kansas City Chiefs became the first NFL teams to clinch playoff spots yesterday. The Saints were guaranteed a playoff berth with their 21-16 win over the Atlanta Falcons and the Chicago Bears' 34-30 loss to the Detroit Lions. The Chiefs secured their playoff spot with a 22-16 defeat of the Denver Broncos.


🏈PACKERS' QB RODGERS BECOMES FASTEST TO 400 TOUCHDOWN PASSES: Green Bay Packers quarterback Aaron Rodgers yesterday became the seventh quarterback in NFL history to throw 400 touchdown passes, but he reached the mark faster than any of the others. Rodgers made it to 400 in his 193rd regular-season game, 12 fewer than the New Orleans Saints' Drew Brees, who'd previously held the record. The 37-year-old Rodgers reached the mark in the Packers' 30-16 victory over the Philadelphia Eagles, in which he threw three touchdowns, the exact number he needed to reach 400. The other five QBs with 400 touchdown passes are: Peyton Manning; Tom Brady; Dan Marino; Brett Favre; and Philip Rivers.

🏀GONZAGA SUSPENDS TEAM ACTIVITIES, CANCELS FOUR GAMES DUE TO CORONAVIRUS CASES: Number 1 Gonzaga has suspended all men's basketball activities through December 14th and will have to cancel four games after there were two positive coronavirus tests in the program, one player and one member of the traveling party. Among the games postponed was the highly-anticipated on against Number 2 Baylor that was supposed to be played this past weekend. It's the most significant so far of the many college basketball games that have been postponed due to the virus.

🏀NBA PLAYERS BARRED FROM BARS, CLUBS UNDER NEW CORONAVIRUS PROTOCOLS: The NBA has released new coronavirus protocols for the upcoming season under which players, coaches and staff will be barred from going to bars and nightclubs, according to a memo sent to teams this past weekend. According to CNN, which obtained the memo, they also won't be allowed to go to public gyms, spas or indoor gatherings of 15 people or more. When the NBA resumed last season from its coronavirus suspension, games were played in a "bubble" in Orlando. But the new season, which will begin December 22nd, will be back to normal with teams playing at home and traveling, although many teams have said they won't have fans in the stands.

🥊MAYWEATHER JR. TO HAVE EXHIBITION FIGHT AGAINST YOUTUBER LOGAN PAUL: Retired boxing champ Floyd Mayweather Jr. announced on Instagram yesterday that he will fight a exhibition bout against YouTube personality Logan Paul on February 20th. The match will be streamed as a pay-per-view event. Paul fought against another YouTuber, KSI, in November 2019 in a six-round bout that he lost. He's also the brother of pro boxer Jake Paul.
Posted 4:14:00 AM