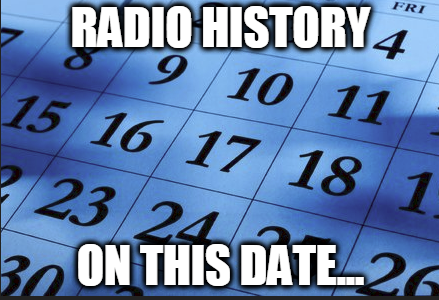 ➦In 1897...Andrew Russell Pearson born (Died at age 71  – September 1, 1969). He was one of the best-known American columnists of his day, noted for his syndicated newspaper column "Washington Merry-Go-Round," in which he criticized various public persons.

From 1935 to 1936, Pearson and Robert S. Allen broadcast a 15-minute program twice a week on the Mutual Broadcasting System. They continued with a 30-minute music and news show, Listen America, in 1939–40, ending this partnership in 1941.

Pearson continued alone on NBC with Drew Pearson Comments from 1941 to 1953. His commentary was broadcast through 1968 on the now-defunct Intermountain Network.

In addition to radio, Pearson appeared in a number of Hollywood movies. In 1952 and 1953, Pearson hosted The Drew Pearson Show on the ABC and DuMont TV networks.

The "Merry-Go-Round" column started as a result of the Pearson's anonymous publication in 1931 of the book, Washington Merry-Go-Round, co-written with Allen, the Washington bureau chief for The Christian Science Monitor. The book was a collection of muckraking news items concerning key figures in public life that challenged the journalistic code of the day.

According to his one-time partner, Jack Anderson, Pearson saw journalism as a weapon to be used against those he judged to be working against the public interest.When forced to choose between a story's accuracy and Pearson's desire to pursue a person whose views he disliked, Pearson had no qualms about publishing the story anyway. He faced 50 libel suits during his 40 year career, but lost only one. 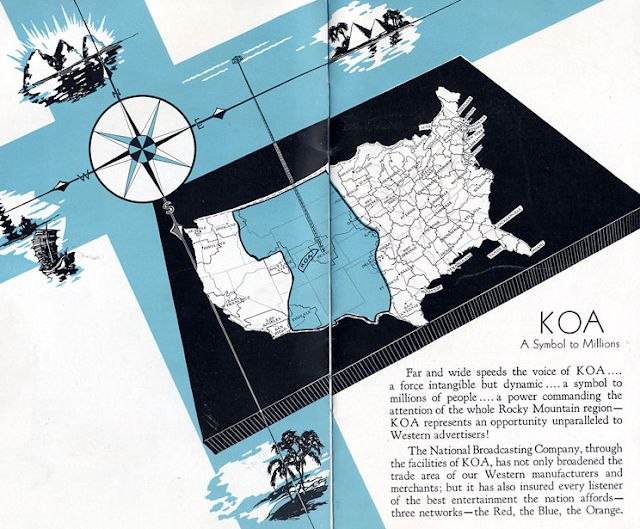 At night the signal can be heard in over 30 states of the U.S. and over most of Canada and Mexico. KOA sometimes can be picked up in California, and is usually picked up in Central Washington state, both locations are west of the Rocky Mountains, an obstacle that prevents most east coast radio stations from traveling west of the Rockies. KOA is frequently heard in northern Europe, Australia and Japan, and is one of the most frequently reported stations worldwide.


➦In 1926...WWVA Wheeling signed-on.  WWVA began broadcasting at 2 a.m. when John Stroebel threw the switch that sent power to a home-built 50-watt transmitter in the basement of his home. One week earlier, the Federal Radio Commission had granted a broadcast license on 860 kHz to the radio station WWVA. In its first year of operation, it broadcast to listeners with home-made crystal sets, principally from Stroebel's own home.

Through the years, WWVA has been granted several power increases. In May 1941, the FCC moved WWVA to 1170, and in August of that same year, granted it the highest power for AM stations: 50,000 watts. With the increase, WWVA became the most powerful AM station in the entire state of West Virginia.

➦In 1926...KXL 400 meters (749.6 K.C.) signed on the air with 250 watts.  KXL’s inaugural broadcast hit the airwaves on December 13, 1926 from the top floor of the Mallory Hotel, beginning with a concert from the Mallory Orchestra. The second hour began with dance music presented by the Lyle Lewis Orchestra.

On September 20, 1927, KXL moved into the “Rose Studio” on the seventh floor of the Bedell Building which featured a plate glass wall for public viewing from the reception room. KXL celebrated the move with a 40 hour broadcast dedication.

➦In 1934...Lulu Belle and Scotty Wiseman, one of the most popular husband-and-wife teams in the history of country music, were married. Lulu Belle and Scotty were regulars on the National Barn Dance radio show, which originated from WLS in Chicago, from 1933 to 1958. Scotty Wiseman wrote the country music standard “Mountain Dew,” as well as the duo’s biggest hit, “Have I Told You Lately That I Love You?”

➦In 1974...M-C Flashbacks to the year-ender edition of Radio&Records from December 13, 1974.  If you remember, StreetTalk, Parallels...then you remember R&R. The Back Page Chart shows quite a variety...everything from Jethro Tull to Bobby Vinton! 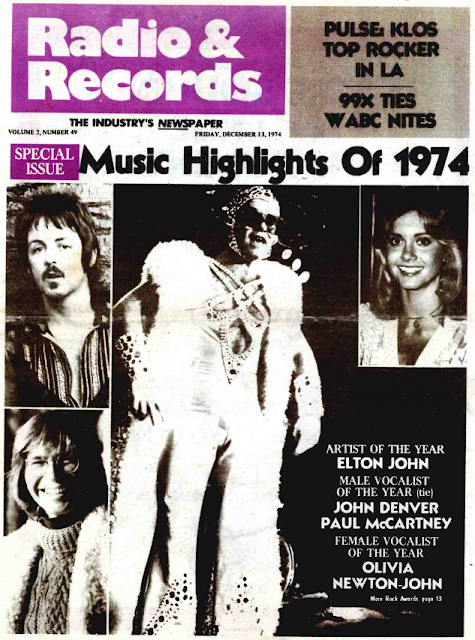 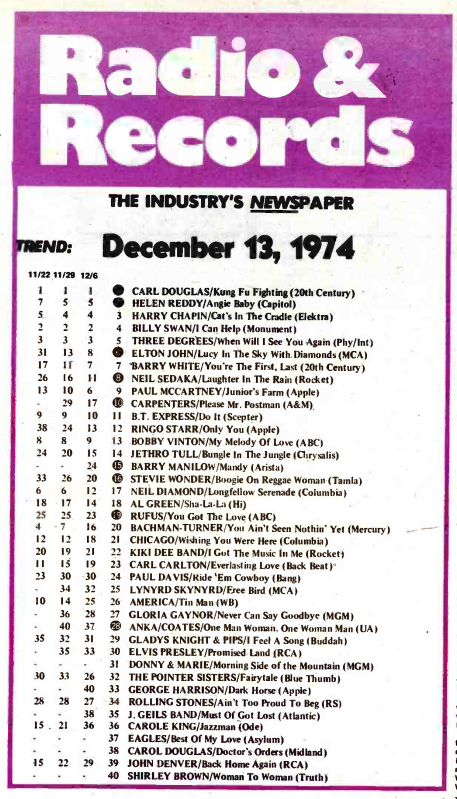 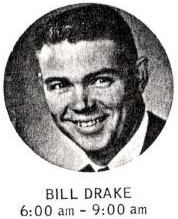 In 1948, the SF Examiner sold KYA to a group of Stanford professors and instructors, doing business as "Palo Alto Radio Station, Inc." This started a turbulent period in the history of KYA. Over a period of almost twenty years, KYA was operated by no less than eight different owners.   The Palo Alto group sold the station to Dorothy Schiff of the New York Post. In the mid-fifties, the station was purchased by Elroy McCaw and John Keating, doing business as KYA, Inc. They in turn sold the station to the Bartell Family Group in 1958, who subsequently sold to Golden State Broadcasters. From 1963 to 1966, KYA was operated by the Churchill Broadcasting Corporation, and in June of 1966 KYA was acquired by AVCO Broadcasting.

Rock'n'roll music made its first appearance on KYA during the Bartell Group days, and then for only a portion of the station's broadcast day.

After an initial success, it quickly took over the entire day's schedule. In 1961, a young unknown Georgia disk jockey who called himself Bill Drake was given the task of programming the station. Drake made drastic changes, streamlining the carnival sound of early rock radio, until an entirely new concept was developed.

"The Drake Sound" became an instant success at KYA, and soon spread to other stations. Before long, Bill Drake had redefined rock'n'roll radio nationwide, which became "Top 40" radio. Drake became a multi-millionaire, programming nearly a hundred AM and FM stations from his home in Bel Air in the 1970s. KYA and KFRC shared the important rock radio audience in San Francisco through the '70s. 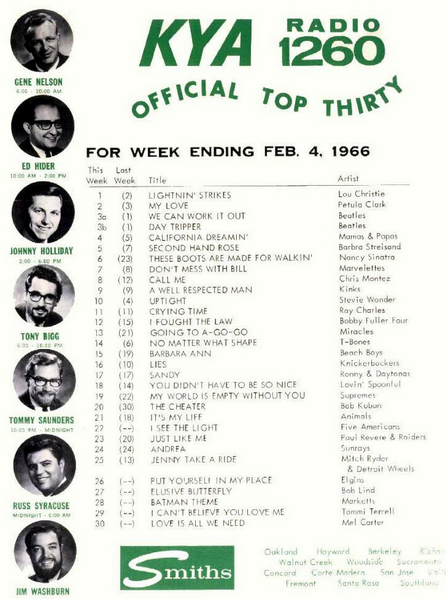 ➦In 1999...Broadcast Music Incorporated reported "You've Lost That Lovin' Feelin'" to be the most played (BMI) song of the century on American radio and television, with more than eight million airings. The original and most famous recording of the song is by The Righteous Brothers.

➦In 2014…Detroit Radio, TV news anchor Bill Bonds, known for three decades for his on-air swagger as much as his colorful behavior off-camera, suffered a heart attack and died at age 82.

For 29-years, Bonds, along with co-anchor Diana Lewis, dominated the Detroit TV market on WXYZ-TV.  His private life was discussed often as he battled alcoholism, buried a daughter and went through a divorce.  The station fired Bonds in 1995, months after a drunken driving arrest which led to his stay for several months in an Atlanta treatment facility.

Pepe covered baseball for the News from 1969 through 1981 and then succeeded the venerable Dick Young as its sports columnist in 1982. During the same period, Pepe wrote the lead game story for every World Series from 1969 to 1981, even in years when the Yankees did not make the Series.

After leaving the News in 1989, Pepe did morning sports for WCBS radio for more than 15 years, which included his popular "Pep Talk" segment.
🎂HAPPY BIRTHDAY
Posted 11:59:00 PM