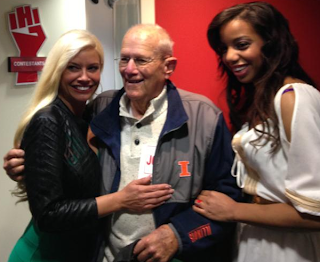 The elderly grandpa who won a date with 2 prostitutes on the Howard Stern Show choked and died last night ... just before he was going to have sex for the first time in years ... TMZ has learned.

86-year-old Johnny Orris died in a Lake Tahoe hospital Thursdaynight ... after apparently choking on his steak at a local restaurant.

Orris appeared on the Stern show back in October with his grandson ... who had entered him in a  contest called "I Want To Get My Grandpa Laid."  Orris said his wife had died more than a decade ago ... and he hadn't had sex since.

On the show, Orris won a date with two prostitutes from the famed Bunny Ranch in Nevada ... and flew to Lake Tahoe to claim his prize.

Bunny Ranch owner Dennis Hof says Orris came to the ranch Thursday night and chose 2 gorgeous working girls he wanted to have sex with -- Caressa Kisses and Vanity.  But before consummating the date ... Orris went out for a nice dinner with his grandson, Ed.

Orris ordered the steak at Sage Room Steakhouse at Harvey's Lake Tahoe ... and began to choke on it.  Ed and the maitre d' immediately began CPR ... and Johnny was transported by ambulance to a hospital where he was pronounced dead.