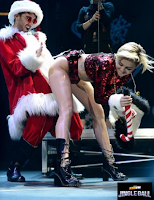 According to StarPulse.com, the singer was visibly upset over technical difficulties during her set, when her microphone failed several times .  "Sorry, the sound isn't working!" she told the crowd. "Are you guys having a good night? I promise, a lot cooler people are gonna come out tonight.

"Is it okay if I perform two more songs and you guys can get to it?"

But things still didn't go well with the sound and Selena was even heard dropping an f-bomb at one point, shouting, "What the f***?" after one song finished and the arena went dark. Her microphone worked just fine at that moment .


This year's official charity for KIIS FM's Jingle Ball 2013 Presented by T-Mobile & Samsung was the Ryan Seacrest Foundation - $1.00 of each ticket sold will be donated to the non-profit organization, which is dedicated to inspiring today's youth through entertainment and education focused initiatives.
Posted 3:18:00 AM