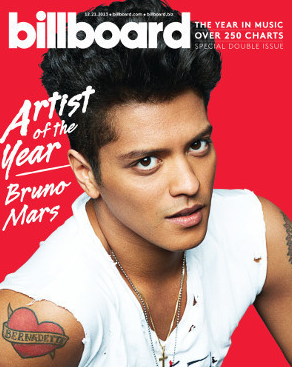 Bruno Mars is locked into Billboard's top honor of 2013.

According to USAToday, the Locked Out of Heaven singer caps off a stellar year with the magazine's title of Artist of the Year. While the pop-culture sphere might have been a bit distracted by twerking, Mars spent the past 12 months racking up accolades and hits.

Chart-toppers off late 2012's Unorthodox Jukebox, such as Treasure, Locked Out of Heaven and When I Was Your Man, carried Mars through radio this year and garnered four Grammy nominations (he has 18 total).