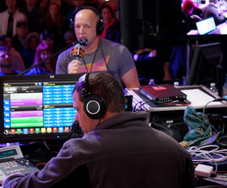 WMMR 93.3 FM's morning show, Preston and Steve once again, camped out in a parking lot for a week’s worth of broadcasts to generate interest and motivate listeners to donate food to feed the hungry.

The just completed marathon netted a record amount of food and cash donations for Philabundance- the Delaware Valley food bank responsible for distributing food to the needy.

$240,521 in cash was also raised even though the focus of Camp Out is for food donations- from as many donors as possible.  One cash donation of $80,000 came from an anonymous source after hearing of Camp Out For Hunger on WMMR. 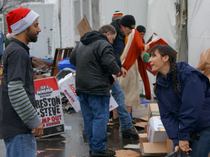 Camp Out for Hunger, after many years in Plymouth Meeting, took over an entire parking lot at Xfinity Live, at Philadelphia’s Sports Complex, and in the shadow of the Old JFK Stadium, where another hunger relief effort was staged.