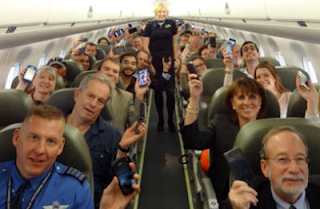 The Federal Communications Commission voted 3-2 Thursday to consider lifting its ban on in-flight cell phone use, according to CNN.

On the same day, the federal Department of Transportation and three members of Congress took steps to block those calls.

Secretary of Transportation Anthony Foxx said that he is looking into the possibility of banning in-flight calls, citing its aviation consumer protection authority.

The DOT will determine whether allowing calls is "fair to consumers."

Many people consider the idea of cell phone conversations annoying in the close confines of a plane, and some are casting it as a consumer rights issue.

"I'm the last person in the world who wants to listen to someone talking to me while I fly across the country," FCC Chairman Tom Wheeler -- who proposed the change -- told a congressional panel Thursday. "But we are the technical agency, and we will make the rules for the way the new technology works."

The Association of Flight Attendants, a union that has been leading a campaign against cell phone calls in-flight, promised to continue lobbying against the proposal.

The FCC is now taking public input on the proposal, and an agency statement says officials will consider consumer and stakeholder opinion before taking any final action. The agency offers more information on its website, including a Frequently Asked Questions (FAQ) and a means of filing comments online.