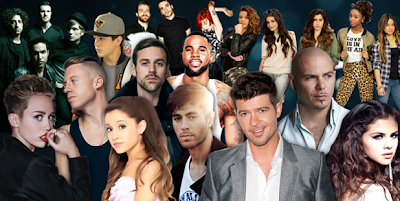 For the first time, Friday night’s 7:30 Jingle Ball at Madison Square Garden will be simulcast over WHTZ 100.3 FM, Z100, according to The NY Daily News.

That includes every act from the opener, Jason Derulo, to the closing antics of Miley Cyrus.

In between: Fall Out Boy, Pitbull, Robin Thicke, Ariana Grande, Fifth Harmony, Austin Mahone, Macklemore, Enrique Iglesias, Selena Gomez and more. If it’s not a complete who’s who of top 40 pop in 2013, it’s the best class picture anyone is apt to snap this year.

Those who want to watch as well as listen can stream the show live on Yahoo, and those who want to savor the highlights can catch them in a two-hour special Dec. 18 at 8 p.m. on CW.

“We’ve been working a long time to bring Jingle Ball to more fans,” says Tom Poleman, president of national programming for WHTZ parent Clear Channel — and not only with streaming. Versions of Jingle Ball will visit more than a dozen cities this year. It’s a model that Clear Channel could use in the future with other music formats, such as country.

But the Jingle Ball mission, says Poleman, remains unchanged. “We want to put the biggest names on one stage,” he says.