Miley Cyrus Is MTV's 'Artist Of the Year' 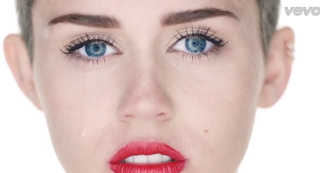 At least, according to MTV.

After stealing the spotlight at not one but two MTV awards shows, starring in an MTV documentary and taking over the network on her 21st birthday, MTV has crowned Cyrus as its best artist of the year.

It's not like the pop star hasn't twerked for it. Her October release, "Bangerz," bowed at No.1 and features two other chart-topping tracks, "We Can't Stop" and "Wrecking Ball." Both singles were accompanied by music videos that became cultural touchstones and almost broke the Internet. (According to Vevo.com, Cyrus' "Wrecking Ball" is its most-viewed video of 2013, followed by the clip for "We Can't Stop.")

The former Disney star also nailed her appearance on "Saturday Night Live" in the fall, when she both hosted and performed. Barbara Walters considers Cyrus one of the most fascinating people of the year, and she somehow managed to end up on Time magazine's best- and worst-dressed lists of 2013.