It's been a tough couple of years for radio operator Southern Cross Austereo, and next year might be tougher from a ratings perspective. But, according to AdNews, chief content officer Guy Dobson reckons life after Kyle and Jackie O morning show could have a positive impact on the balance sheet if not the audience numbers.

In their final ratings period with 2Day FM in Sydney, Kyle and Jackie O's ratings dropped 0.8 percentage points, but remained the highest rating FM station in Sydney, according to Nielsen figures released this morning. These figures will drop considerably in the next ratings period, Dobson conceded.

But he claimed the benefit of the radio duo's departure will be seen on the revenue side. “We're under no illusions that this is going to be tough,” Dobson said. “But the decision was not a ratings decision, it was a decision about culture and revenue. 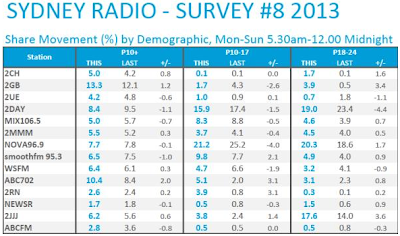 “The show we build in 2014 will be much more client friendly. Previously the breakfast show was focused only on the audience, never on sales results." Any audience-focused content editor or guardian would argue that is their perogative. But Dobson said that "the environment was too hot for some advertisers. We were the number one radio network but competitors with much smaller ratings were doing better stuff in the market from a sales perspective."

The controversial radio breakfast duo, who has held the number one FM position in Sydney over the last 51 consecutive surveys, resigned from Southern Cross Austereo in early November. It was reported that contract disputes were the cause of the parting.

“Kyle and Jackie is one the world's biggest radio shows, and are joined every day by the world's biggest stars,” ARN chief executive Ciaran Davis said. “It's unprecedented to have the country's #1 radio team move networks to create a brand new station and we couldn't be happier that they've made this switch with us.