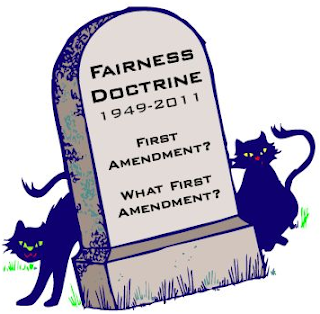 A new study proposed by the Federal Communications Commission has caught the wrath of 16 GOP members of the Commerce Committee, who, according to AdWeek, see it as a sneaky way to bring back the Fairness Doctrine.

Although the Fairness Doctrine—requiring broadcasters to give equal time to both sides of controversial issues—was scrapped in 1987, it wasn't until August 2011 that it was officially taken off the books.

The purpose of the FCC's "Multi-Market Study of Critical Needs" is to help the commission take action to lower market entry barriers in the broadcast space. As part of the $900,000 study, the FCC intends to do a qualitative analysis of providers by examining the station news process—how stories are selected, prioritized and produced. To do that, the study would query journalists and station owners about their news philosophy and what impacts story selection.

That, say the GOP lawmakers, crosses the "freedom of the press" line.

“Given the widespread calls for the commission to respect the First Amendment and stay out of the editorial decisions of reporters and broadcasters, we were shocked to see that the FCC is putting itself back in the business of attempting to control the political speech of journalists," they wrote in a letter on Dec. 10. "The commission has no business probing the news media’s editorial judgment and expertise," wrote Commerce Committee chairman Fred Upton (R-Mich.) and 15 other lawmakers.

Just as curious, the GOP lawmakers asked new FCC chair Tom Wheeler to explain why the study was only limited to one market, Columbia, S.C., when it originally would have covered several markets of varying sizes.