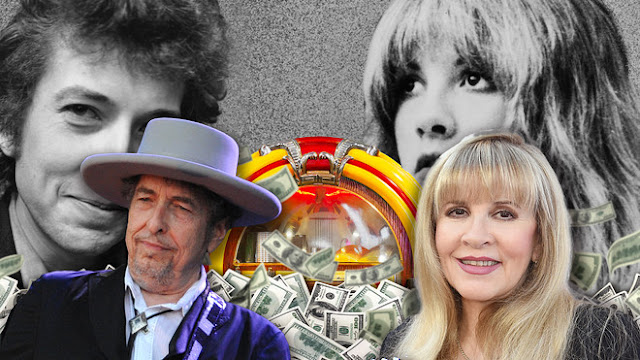 Bob Dylan, Stevie Nicks and now Paul Simon. Older, established singers have sold their song catalogs for huge sums of money over the past year. A challenge for music investors is how to value newer acts. 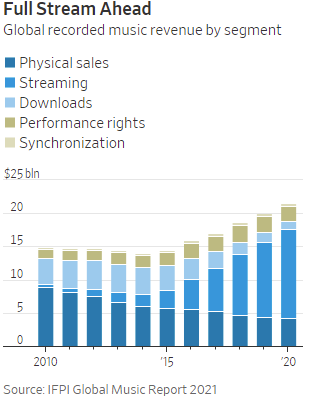 The Wall Street Journal reports demand for music publishing assets—the rights to the underlying composition of a song—is growing among traditional record labels, buyout firms and hedge funds. In 2020, $4.67 billion of music catalogs changed hands globally, a 14% increase on 2019’s tally based on data from analytics firm MIDiA. Private-equity giant KKR is the latest investor to pile in and is teaming up with Bertelsmann Music Group to buy music assets.

Song catalogs can make good investments because of the royalty payments they generate and the diversity they add to portfolios. Every time a tune is played on a streaming platform like Spotify, or in a nightclub or bar, the rights owner is paid a fee. Streaming is boosting global music consumption and generating better data for calculating royalties. There are also bragging rights to owning a major hit.

The fattest checks have been written for older artists. Mr. Dylan sold his catalog to Universal Music Publishing Group late last year—at a $300 million price tag, according to industry trade publications. Last week, Mr. Simon cashed in songs including “Mrs. Robinson” and “Bridge Over Troubled Water.” Top acts from the 1960s and 1970s can now get payouts of more than 20 times their annual net royalties. A decade ago, music catalogs fetched 9.2 times on average, according to investment bank Shot Tower Capital.

As the songs of legendary singers grow expensive, investors will be tempted by newer performers or different genres like jazz. This is a cheaper but riskier strategy. Although music catalogs are sometimes compared to bonds, the income they generate can be volatile. Royalty payments are high soon after a song is released and then quickly decay. Several years on, a track’s income can be 70% to 90% below peak, according to one investor in the industry.

The danger of overpaying for new music is therefore high. Unlike older song catalogs that have settled into an established pattern, it is trickier to model the future cash flows of fresh releases. And new music isn’t growing as fast on digital platforms. Streams of tracks released in the 2000s are increasing at half the rate of songs from the 1960s, data cited by brokerage Jefferies shows.

One reason might be that older listeners have been relative latecomers to streaming and are now signing up and listening to familiar tunes. But younger generations are also discovering classics. After a TikTok video that used Fleetwood Mac’s 1977 track “Dreams” went viral last year, streams of the song shot up.

Of course, brave bets on today’s acts could pay off spectacularly if they are still being listened to in 30 years’ time. Investors that want a steadier beat can always stick with the classics.