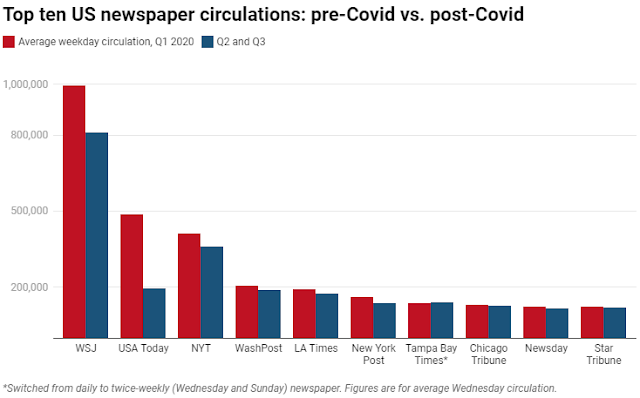 USA Today lost more than half of its print sales as US newspaper circulations were hit by the Covid-19 crisis last year, the U-K-based Press Gazette research has found.

The title, owned by publishing giant Gannett, saw its print circulation fall by 60% in the months after Covid-19 restrictions were imposed across the country.

America’s other largest newspapers – the Wall Street Journal and the New York Times – also experienced significant declines over the summer. USA Today and the Journal were particularly badly hit by falling sales to hotels as travel dried up during the pandemic.

On average, the largest ten weekday newspapers in the US experienced a circulation fall of 20% in the six months to September 2020, Alliance for Audited Media (AAM) figures show.

But this average was dragged down by USA Today and the Journal. Other declines were less extreme among newspapers that were not reliant on hotel sales, with subscriptions holding up over the summer.

For this analysis, Press Gazette obtained AAM certificates for the ten newspapers we previously identified as having the largest weekday circulations in the US.

Beneath our US newspaper circulations table, we take a closer look at the AAM certificates of the Wall Street Journal, New York Times and USA Today to examine where sales were lost.

Outside of the top three newspapers, the circulations of the Washington Post, Los Angeles Times and New York Post fell 9%, 10% and 14% respectively.

The smallest newspapers in the top ten – the Chicago Tribune, Newsday and the Star Tribune – experienced relatively minor declines of 3%, 4% and 2% respectively.

The Tampa Bay Times’ average weekday circulation rose from 137,590 to 142,516, but this was after it made the switch from a daily to a newspaper published only on Wednesdays and Sundays.