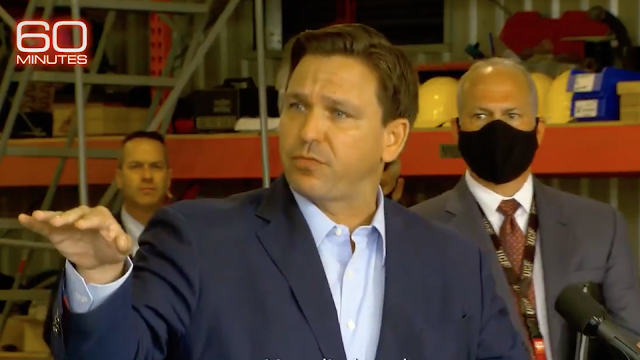 The Poynter Institute for Media Studies has joined the growing chorus of criticism against the controversial "60 Minutes" report that suggested Florida Gov. Ron DeSantis, R., engaged in a pay-for-play scheme with Publix over distributing coronavirus vaccines, reports FOX News.

"There was really no there there," Poynter’s senior media writer Tom Jones wrote.

"’60 Minutes’ is the finest and most respected investigative journalism show in the history of television … that doesn’t mean it’s infallible," Jones wrote. "And a sloppy moment on Sunday’s show is raising serious concerns."

"If that is true — if DeSantis ran a ‘pay-for-play’ scheme involving vaccinations for the coronavirus — that’s an explosive story. But ‘60 Minutes’ really didn’t deliver substantial evidence that DeSantis did any such thing," Jones wrote.

"Yes, Publix donated to DeSantis’ reelection campaign. But that is neither illegal nor unusual. Big companies often donate to political campaigns of both major parties," Jones continued. "Yet the ‘60 Minutes’ piece used that as the main evidence for its premise that DeSantis did something shady. They really didn’t have much else on that topic."

"There’s nothing wrong with a news network digging into how vaccines are distributed. And political contributions are a good place to poke around on such a story. But, in this case, it doesn’t appear as if DeSantis did anything wrong," Jones wrote. "If he did, ‘60 Minutes’ failed to provide enough information, context or evidence that he did … This doesn’t ruin the ‘60 Minutes’ brand, but this was not one of the show’s finer moments."

Despite the widespread backlash, CBS News has defended its reporting.

When asked why a defense of pay-for-play allegations from the "60 Minutes" report wasn’t in the statement, a CBS News spokesperson told Fox News the newsmagazine repeated claims already made in Florida newspapers and declined additional comment.
Posted 3:33:00 AM