ADL: Tucker Carlson Has 'Got To Go' 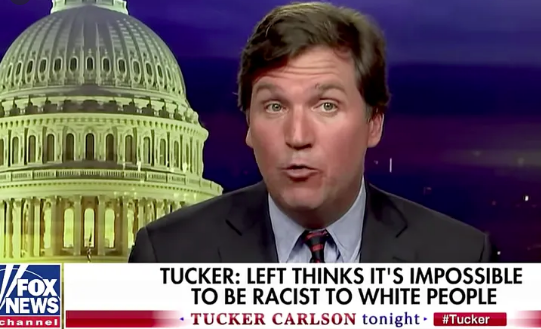 The head of the Anti-Defamation League (ADL) has called for Fox News host Tucker Carlson to be fired after a segment Thursday that referenced "replacement" theory.

The ADL head explained that the “Great Replacement” theory "is a white supremacist tenet that the white race is in danger by a rising tide of non-whites.”

Greenblatt was referring to Carlson’s appearance on “Fox News Primetime,” when, talking to columnist Mark Steyn, the host offered a theory on why Democrats are pro-immigration.

.@TuckerCarlson: “replacement theory” is a white supremacist tenet that the white race is in danger by a rising tide of non-whites.

It is antisemitic, racist and toxic. It has informed the ideology of mass shooters in El Paso, Christchurch and Pittsburgh.

“I know that the left and all the little gatekeepers on Twitter become literally hysterical if you use the term ‘replacement,’ if you suggest that the Democratic Party is trying to replace the current electorate,” Carlson said. “But they become hysterical because that’s what’s happening actually. Let’s just say it. That’s true.”

Fox News would not comment on Greenblatt’s tweet or the similarities between what Carlson was saying and past white nationalist theories except to point to the host's comments that emphasized "this is a voting rights question."

In addition to Greenblatt’s tweets, the ADL on Friday posted and emailed a letter to Suzanne Scott, the CEO of Fox News, regarding Carlson’s comments.