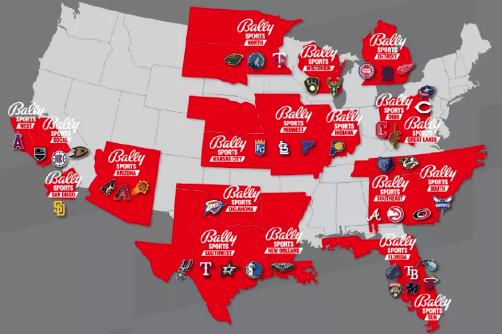 When Disney bought Fox’s entertainment assets in the spring of 2019, it valued the 21 Fox Sports-branded regional sports networks at more than $20 billion.  A few months later, those same RSNs were valued around $14 billion when Disney sold them to Sinclair: $10.6 billion for the group and another $3.5 billion for YES Network.

The value of Sinclair’s RSNs, which rebranded to Bally Sports networks last week, has fallen even further, with profits caught between shrinking distribution and rising rights fees, reports The New York Business Journal.

Given a media environment that has seen the RSNs lose half their value in just two years, it’s worth asking whether the RSN business — historically one of the most profitable parts in all of media — is still a good one.

“We’ve seen a decline in subs,” said Steve Rosenberg, Sinclair’s president of local sports. “I believe that the health of delivering these games to consumers is going to be greater as we go forward. … It’s just getting to the consumer that’s not getting it now because, let’s face it, there’s a lot of consumers who would like to see these games that are outside of the [cable] bundle.”

The challenges for Sinclair’s local sports channels are twofold: distribution and programming.

On the distribution front, Dish Network, YouTube TV and Hulu already have dropped the channels from their lineups. Usually, these types of disputes are cleared up around Opening Day because distributors are loath to be dark during one of the most popular days on the Major League Baseball calendar.

But Sinclair was not able to come to terms last week with any of those distributors, and no deals appear to be on the horizon. In fact, distributors have become more emboldened in these disputes, evidenced by Dish Network dropping several NBC Sports RSNs and MASN just days before the MLB season began last week.

Then there are the rights fees, which show no sign of slowing down. Just before Opening Day, Sinclair signed a deal with the Miami Marlins, worth around $50 million per year over seven years, sources said. Weeks before that, it cut a deal with the Milwaukee Brewers worth around $34 million per year over four years. Both of those deals included equity, sources said.

With 19 RSNs, rights deals expire somewhere every year. The group of rights that are up next year include those for the Los Angeles Clippers, which is certain to be a tough negotiation. The Clippers signed a six-year deal with Fox Sports Net in 2016 worth around $50 million per year. The agreement, which came after Clippers owner Steve Ballmer threatened to launch his own platform, allowed the team to exploit some digital rights. Six years on, Ballmer will be more likely to act on those direct-to-consumer aspirations.