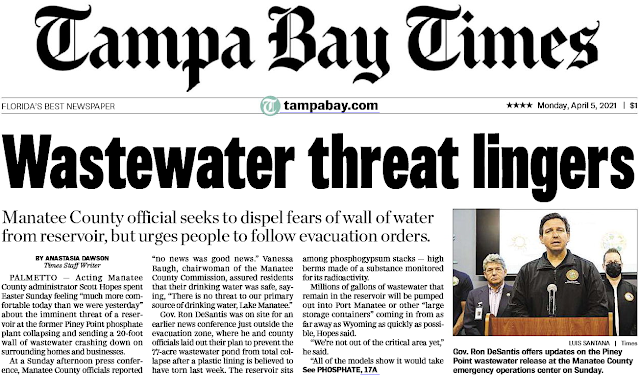 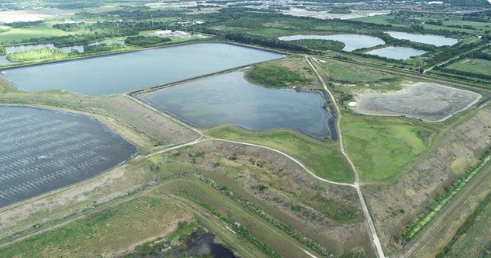 A breach in the wall of a wastewater retention pond is threatening a collapse that could release 600 million gallons of toxic wastewater that was left behind by the operators of long-abandoned phosphate mining plants. A state of emergency has been declared and nearby residents have been evacuated.
➤GOOD NEWS ON THE JOBS FRONT: The number of nonfarm jobs in the U.S. jumped by 916,000 last month and the unemployment rate fell to 6%, according to the Labor Department. The numbers were much better than expected, pointing to better times ahead. A gradual lifting of COVID-19 restrictions, a proposed nationwide infrastructure program, and a fast rate of vaccination all appear to have contributed to creation of new jobs or rehiring of laid-off workers.
The stock markets are expecting a good day today. Dow Jones Average pre-market prices were up more than 200 points.

➤JORDAN LOCKS UP A PRINCE: The former crown prince of Jordan is being held under house arrest, accused by his half-brother King Abdullah of working with foreign entities to try to destabilize the nation. Prince Hamzah, son of the late King Hussein and his American-born wife Queen Noor, had been designated crown prince but was passed over in favor of his half-brother. Hamzah has accused the country's leaders of incompetence and corruption. 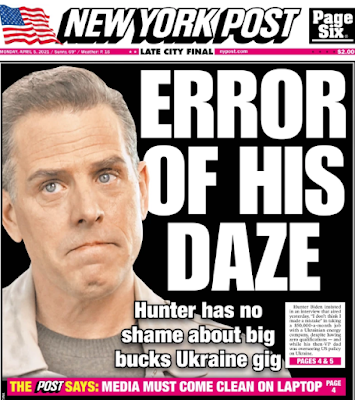 Hunter Biden on his memoir "Beautiful Things" and his struggles with substance abuse https://t.co/mw838yWtog


➤FACEBOOK USER DATA EXPOSED: The private information of half a billion Facebook users, including company founder Mark Zuckerberg, has been posted online for free use by hackers. The information includes everything in a user's profile: phone number, birth date, location, and email address. A spokesman told CNN that the data breach was caused by a problem that was fixed in 2019.

➤TRUMP CAMPAIGN REFUNDS $122 MILLION: The Trump campaign and its allies have been forced to refund some $120 million in campaign donations made by people who say they were tricked into making recurring weekly or monthly donations when they intended to make just one donation. The pitch on the fundraising site WinRed had a prechecked box permitting repeat donations. Later, a second prechecked box allowed the company to grab double the amount offered. The New York Times first reported the matter.

➤THERE'S A HELICOPTER ON MARS: NASA has dropped a helicopter called Ingenuity onto the surface of Mars over the weekend to prepare for the helicopter's first flight over the red planet next week. The four-pound, solar-powered vehicle carries two cameras that will record its flight. Perseverance, the mother ship, will watch from a safe distance.
➤NEW HOMEBUYERS ARE SEEKING OLD HOMES, UNAWARE OF HOW COSTLY RENOVATIONS CAN BE:  Most Americans have spent most of the last year at home, and this lead to many people buying new homes. Data from Realtor.com shows sales of homes built more than 100 years ago rose by 16 percent in 2020 in the tri-state area (New York, New Jersey, and Connecticut) compared to last year. During the same period, New York City saw a sales decline of six percent overall. Old houses can sometimes be cheap to buy, but experts warn that restoring the homes to their former glory requires some serious cash and know-how. Those familiar with renovating old homes say you should budget $300-$400 per square foot, and $10,000 per fireplace when renovating. You should also know that sourcing true period materials, such as stained-glass windows or reclaimed wood to match floorboards, can cost hundreds of thousands more.

A man who was arrested after refusing a temperature screening at Disney Springs told authorities he couldn’t be told to leave because he spent $15,000 on his vacation. https://t.co/dwj25d4xbn

➤GOLDEN RETRIEVER GRABS TV STARDOM: A golden retriever seized his shot at Russian television stardom on Friday when he leaped onto a reporter while she was live on air, grabbed her microphone, and ran away with it. Moscow viewers got to watch the reporter chasing the golden retriever down a Moscow street. The two were later reunited in an amicable joint television appearance.

A dog in Russia grabbed the reporter's microphone and ran away during a live broadcast pic.twitter.com/R1T8VZ5Kpt

➤NOT HER FAULT: Egypt's first female sea captain has gotten a load of grief on social media for causing the grounding that blocked the Suez Canal for almost a week. Problem is, she had nothing to do with it and was hundreds of miles away when it happened. It's a classic example of fake news. Somebody altered a headline on a legitimate news story about the mishap to suggest that Captain Marwa Elselehdar caused it.

➤WHATABONUS: Fast-food workers are pandemic heroes, too. To show some appreciation, the San Antonio-based Whataburger chain is awarding more than $90 million in bonuses to its 46,000 employees. That's an average of nearly $2,000 each. Employees “helped set record company performance numbers” for the year, the company said. It also gave workers emergency pay and doubled their retirement account match for 2020 as thanks for their extraordinary service.
🏀A CARDINAL VICTORY: The Stanford Cardinal squeaked by the Arizona Wildcats 54-53 last night to win their first NCAA women's basketball championship since 1992. The all-Pac-12 final was the first for the conference in either men's or women's basketball history.

The PAC-12 has claimed a National Women’s Basketball Championship for the 1st time since 1992. That was also the same time the Stanford Cardinal won their last championship.

Arizona finished with 5 wins this postseason after just having 6 in their entire program history. pic.twitter.com/k0PNupbdC3

🏀IT'S THE BULLDOGS VS. THE BEARS: The Gonzaga Bulldogs and the Baylor Bears meet tonight for the 2021 NCAA Tournament National Championship game. The Bulldogs defeated UCLA's Bruins 93-90 on Saturday. Jalen Suggs pulled it off in overtime with a buzzer-beating 3-pointer. Meanwhile, Baylor Bears blew past Houston Cougars 78-59. Tonight's game will be their first national title game since 1949. 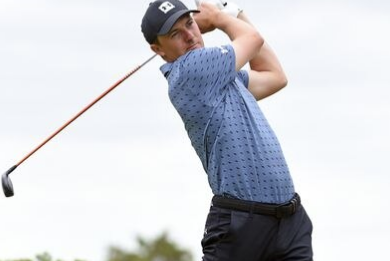 🏌JORDAN SPEITH GETS A WIN: Jordan Spieth captured a two-shot win at the Valero Texas Open yesterday. It's his first win since 2017.

🏒CANUCKS PAUSE SEASON: The Vancouver Canucks had already paused their season until this Wednesday, but it looks like the hiatus will last longer than that. More than 20 players and coaches have tested positive for a new variant of COVID-19. The pause was declared after two players and a coach tested positive. There's growing speculation that the NHL will be forced to extend the season beyond May 11.

🏀BIG DEAL FOR JRUE HOLIDAY: Jrue Holiday and the Milwaukee Bucks have agreed to a four-year maximum contract extension worth up to $160 million, The Athletic reported. Yahoo Sports writer Liz Roscher calls Holiday, 30, "one of the NBA's most underrated players." Not anymore. He has averaged 17 points, 5.4 assists and 4.6 rebounds per game this year.

⚾BIG WEEKEND FOR YERMIN MERCEDES: Yermin Mercedes may not be the biggest star of the Chicago White Sox, but he's earned a place in the baseball history books. Over the weekend, the 28-year-old rookie broke a record set in 1900 for most consecutive hits to start a major league baseball season. Mercedes sat out opening day, then recorded five hits on Friday and three more on Saturday. That's an 8-for-8 start.
Posted 4:35:00 AM