Report: Tribune Board May Be Favoring Rival Bid

A Maryland hotel magnate and a Swiss billionaire have made a bid for Tribune TPCO 0.22% Publishing Co. that the newspaper chain is expected to favor over a takeover deal it already struck with hedge fund Alden Global Capital LLC, reports The Wall Street Journal.

A special committee of Tribune’s board has determined that a roughly $680 million, $18.50-a-share bid submitted late last week by Choice Hotels International Inc. Chairman Stewart Bainum and Hansjörg Wyss is reasonably likely to lead to a proposal that is superior to Alden’s $635 million deal, people familiar with the matter said. That is legal deal-speak indicating Alden may need to raise its bid or risk losing the deal.

The decision came after the two men indicated they plan to personally contribute more than $600 million combined, up from a previous total of $200 million, the people said. 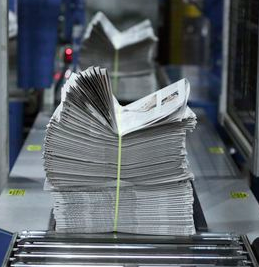 Now that the group has submitted a fully financed bid, it will get access to private financial data to conduct due diligence and negotiate other terms, a big step toward completing an agreement that could replace Alden’s, they said. There is no guarantee the group will succeed in doing so, and it is still possible it could change its offer or walk away after reviewing the company’s finances.

If Alden loses the deal, it would mark a stunning, 11th-hour turnaround for the New York hedge fund, and a major victory for critics who say its model of aggressive cost-cutting has hurt the local news industry. Alden had spent nearly a year-and-a-half positioning itself to take over Tribune, publisher of nine large-market daily newspapers including the Chicago Tribune, New York Daily News and the Baltimore Sun.

Alden struck a deal in February to pay $17.25 per share for the rest of the company. It had agreed to separately sell Mr. Bainum the Baltimore Sun for $65 million once the Tribune deal was finalized. That side deal fell apart over disagreements about the cost of continuing services the Sun would have received from Tribune after the sale.

Alden owns a newspaper company called MediaNews Group that has amassed a portfolio of about 70 daily papers through a string of acquisitions, most notably the Denver Post, San Jose Mercury News and St. Paul Pioneer Press. The hedge fund has been a lightning rod for criticism in the media industry for aggressive cost-cutting at titles it acquires.

Over the past decade, it has slashed newsroom staff by more than 75% at many of its papers, according to the News Guild.