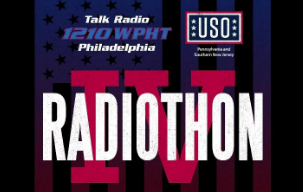 “We’re proud of another successful year raising funds and awareness for Liberty USO,” said David Yadgaroff, Senior Vice President and Market Manager, Audacy Philadelphia. “These individuals have made the ultimate sacrifice for our country and it’s our honor to band together with our listeners to support them and their families.”

The United Service Organizations (USO) of Pennsylvania and Southern New Jersey, Inc. (Liberty USO) is a chartered affiliate of World USO, a 501 (c)(3) nonprofit, whose mission is to enhance the quality of life of the U.S. Armed Forces personnel and their families.

Listeners can tune in to Talk Radio 1210 WPHT (WPHT-AM) in Philadelphia on air, as well as nationwide on the Audacy
Posted 1:15:00 AM