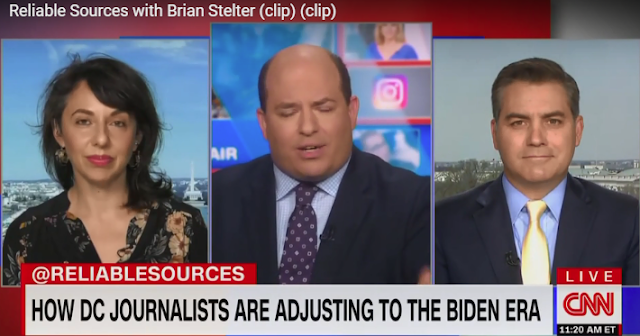 “When you’re asking me if I was run down, I thought you were referring to how I felt during the Trump era," Acosta told CNN chief media correspondent Brian Stelter when he was asked about how he was feeling so far in President Joe Biden's term. "I think we’re all dealing with some post-Trump stress disorder, other than that ‘Happy Easter’ he was saying in those statements a few days ago."

Acosta's "Happy Easter" mention was in reference to a Sunday morning message from former President Donald Trump in which he railed against "Radical Left CRAZIES" and touched on the so-called "rigged" November 2020 election.

“Happy Easter to ALL, including the Radical Left CRAZIES who rigged our Presidential Election, and want to destroy our Country!” Trump said in a message from his Save America PAC on Easter Sunday.

On Saturday, the former president wrote, “For years the Radical Left Democrats have played dirty by boycotting products when anything from that company is done or stated in any way that offends them. Now they are going big time with WOKE CANCEL CULTURE and our sacred elections. It is finally time for Republicans and Conservatives to fight back—we have more people than they do—by far!” capping off the message with “Happy Easter!”

Acosta, who was CNN's chief White House correspondent during the Trump years before becoming chief domestic correspondent, also spoke on moving forward from Trump's presidency and possibly limiting the amount of coverage he receives while he resides at his Mar-a-Lago resort in Palm Beach, Florida.