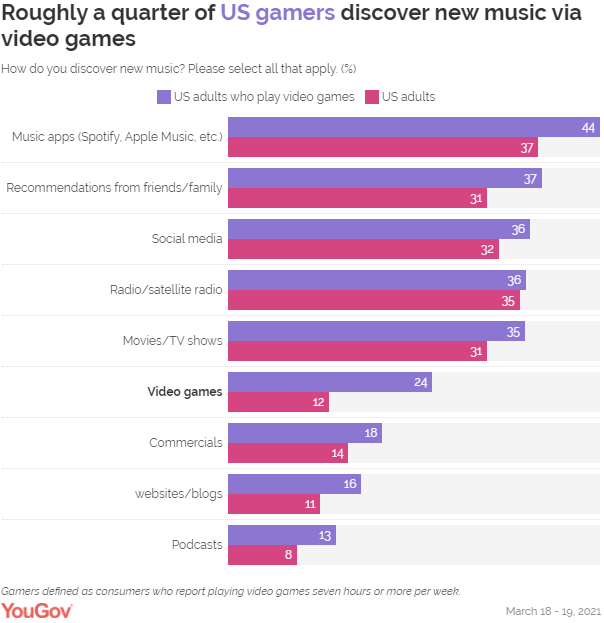 A YouGov survey conducted in the United States shows just how many Americans are discovering new music through video games, as well as through other channels.

The research found roughly a quarter of gamers discover new music through video games (24%). While that figure is behind other channels, such as music apps, recommendation from friends, and social media, it remains a substantial portion.

And video games as platforms for new-music discovery will only get more prevalent. “We often begin working on a soundtrack almost a year in advance, trying to identify new music we believe will define the sound of the coming season,” Steve Schnur, president of music at game publisher EA, said to the Guardian in 2018. The “Grand Theft Auto” and “Tony Hawk Pro Skater” franchises are good examples of games that have soundtracks nearly as famous as the games themselves.

The relationship between video games and music is further deepened with lasting appreciation for original scores, either from newer titles such as “The Last of Us”, or classic series such as “Zelda” or “Final Fantasy.” 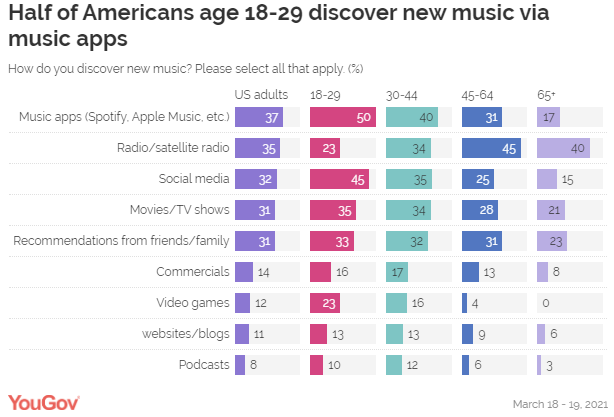 Meanwhile, a broader look at music discovery shows significant differences across age groups. Half of Americans aged 18-29 discover new music through apps such as Apple Music or Spotify (50% versus 37% of the general US public). Our data also shows a significant portion of this younger age group get their music from social media (45% versus 32% of the general population). While social media has been an important platform for the music industry for some years now, growing platform TikTok can be at least partially credited with creating a new generation of artists such as Lil Nas X.

Roughly a third of young Americans get new music from movies and TV shows, which remains an important category across all age groups.

Tracking where consumers are getting their music is important to the music industry, but it’s also critical data for brands. Our data shows that 14% of Americans get new music from commercials, making ads a crucial platform for brands to make a connection with their audience.

YouGov data also shows 35% of Americans still get new music from radio or satellite radio, 31% from recommendations, 11% from blogs or websites and 8% from podcasts.