After a year in which streaming became even more important to millions of Americans, thanks to the coronavirus pandemic, Netflix still dominates the streaming universe in the U.S.

But new data shared by Ampere Analysis with TheWrap shows that while Netflix holds 20% of the U.S. streaming market, its dominance over the rest of the streaming landscape has shrunk from 29% — a drop of nearly one third– as more services enter the market. 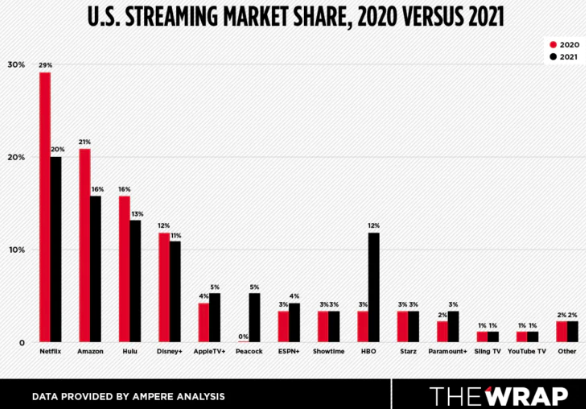 A few points worth mentioning:
• Netflix’s U.S. market share has taken a hit in the last year — even as it added a company-record 36.58 million new accounts globally in 2020. Netflix’s U.S. market share has been sliced from 29% to 20% since the start of 2020; that’s a 31% drop in the last year.
• In January, Netflix reported that it had 73.94 million subscribers in both the U.S. and Canada (Netflix always reports the two markets together); an estimated 7 million of those subscribers come from north of the border, meaning Netflix has about 67 million active subscriptions in the U.S. alone.
• Netflix’s slice of the overall streaming pie in the U.S. has gotten smaller as new services like HBO Max and NBCUniversal’s Peacock emerged in 2020.
• The same can be said for Amazon Prime Video. A year ago, Amazon Prime Video claimed 21% of the U.S. streaming market, but that’s now down to 16% — a drop of nearly 24%.
• Amazon Prime Video is a bit trickier for streaming analysts to project. For one thing, anyone who pays for an Amazon Prime subscription gets access to Prime Video, but that doesn’t necessarily mean every Prime subscriber is watching “The Marvelous Mrs. Maisel” or “Jack Ryan.” (Some may sign up for free shipping on goods.) Amazon hasn’t given an update on its total Prime memberships since early 2020, when it announced it had passed 150 million paying customers; Ampere’s data indicates nearly 54 million of Prime members use their Prime Video app in the U.S.
• Disney-owned Hulu takes the bronze medal here, but that includes both its Hulu streaming service and its live TV streaming service.
• This may be the most surprising aspect of Ampere’s data: Disney+ is sitting in fifth place in the U.S. streaming field, and even finds itself narrowly behind HBO despite the uneven rollout of HBO Max last year. While Disney+ reported 94 million subscribers by the end of 2020, the service has a strong presence outside the U.S., and as The Information recently reported, a hair less than 40 million of its subscribers are American.
• HBO’s numbers are impressive. In January, parent company AT&T boasted that HBO Max had topped 41 million American subscribers, edging past Disney+ domestically — but that tally includes some chicanery: About 17.2 million of those subscribers are “activated,” as AT&T put it, meaning they’ve downloaded the HBO Max app. (Remember, HBO already had existing streaming customers across both its HBO Go and HBO Now services prior to HBO Max.)
• The biggest gainers, in terms of market share, were Peacock, which went from 0% of the market to 5% of the market by the end of 2020, and HBO, which only claimed 3% of the streaming pie at the same time last year; that slice has now quadrupled in size, as HBO has looked to propel its linchpin service, HBO Max, into the upper echelon of streaming services. Most notably, in an effort to win over new subscribers, Warner Bros. decided to release all 17 of its 2021 films — including “Godzilla vs. Kong” and Keanu Reeves’ “Matrix 4” —  on HBO Max at the same time they hit theaters this year.
For another angle, here’s how the current streaming hierarchy shakes out in the U.S., a few weeks before Netflix and other streamers are set to report their Q1 subscriber gains (or losses): 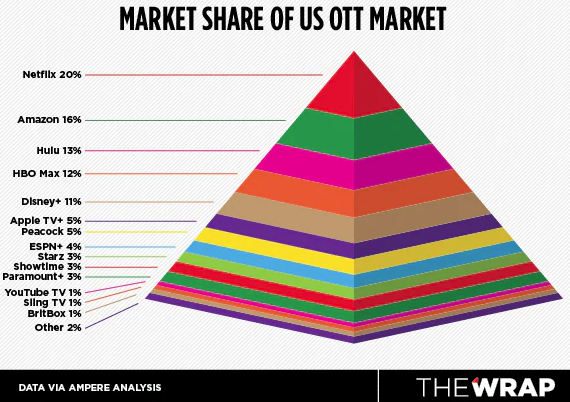