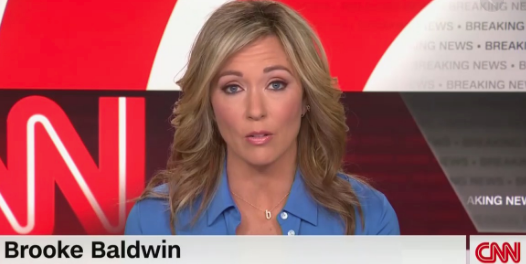 On her way out the door, departing CNN anchor Brooke Baldwin is airing grievances about the lack of opportunities for women at the liberal network, reports FOX News.

"The most influential anchors on our network, the highest-paid, are men. My bosses, my executives, are men. The person who oversees CNN Dayside is a man, and my executive producer for 10 years is a man. So I’ve been surrounded by a lot of men," Baldwin said on the Ms. Magazine podcast.

Indeed, CNN is the only major cable news network in America without a female primetime host and many of the network’s high-powered executives are men. Baldwin said she sees the landscape changing as more women appear on cable news, but she mostly teamed with men during her career.

"I was surrounded by a lot of dudes," she said.

Baldwin, who was taken off the air and replaced by Jake Tapper for the month leading up to the 2020 election, was then asked what male leadership at CNN means when it comes to reporting important stories for women.

"I know I, personally, fight for women’s stories," Baldwin said, noting she leaves a poster from her CNN series "American Women" hanging in her office as a reminder she was able to complete the project.

She said "little by little" CNN has started to hand more power to women, pointing to digital and newsgathering executives as examples.

"It’s getting better but we still have a bit of a ways to go," she said. "I want more women in the room."

In 2018, Hollywood trade publication "TheWrap" analyzed weekday programming on various networks and found CNN didn’t have as many female anchors as competitors.

Baldwin, arguably the most high-profile woman CNN when the 2018 study was conducted, is now exiting.

Baldwin announced in February she would exit CNN after 13 years. Her exit was foreshadowed last fall after she sent cryptic messages on Instagram that suggested she was being forced off the air, following the network's announcement Tapper would take over her timeslot ahead of the 2020 presidential election.