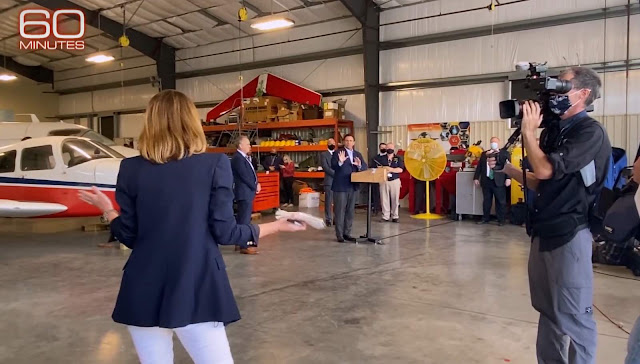 “As we always do for clarity, 60 Minutes used the portion of the governor’s over two-minute response that directly addressed the question from the correspondent,” a spokesman for the network said Tuesday in a statement to Mediaite.

The network took broad editing liberties in Sunday’s edition of 60 Minutes, which sought to blame Florida Gov. Ron DeSantis (R) for a program that briefly allowed a limited number of Publix grocery stores in Palm Beach County to deliver Covid-19 vaccines before other drugstore chains.

The program included an exchange between DeSantis and the network’s Sharyn Alfonsi, who accused DeSantis of making the call after Publix contributed $100,000 to his campaign.

The program showed DeSantis calling the claim a “fake narrative,” but omitted the more substantive portion of his response, which included DeSantis noting that Publix was the first company to volunteer.

Critics, including some Democrats, took issue with 60 Minutes’ portrayal of the situation. “The reporting was not just based on bad information — it was intentionally false,” Democratic Palm Beach County Mayor Dave Kerner said in a Monday statement.

Meanwhile, The Palm Beach Post reports DeSantis blasted the producers of a  60 Minutes episode as “smear merchants,” who “lied” about why the predominantly Black farming community was overlooked when all of the county’s vaccines were given to Publix in January.

“The corporate media thinks they can run over people. You ain’t running over this governor,” DeSantis said to a smattering of applause from supporters. “I’m punching back.”

He didn’t detail his plans to punish the news program for suggesting he rewarded Publix for contributing $150,000 to his 2022 re-election campaign.

“We’re going to fight back,” he said. “So, this is not over by any stretch of the imagination.”

During the press conference, DeSantis made the same claims. Further, he said, attacking Publix was a serious blunder.

“You know it’s New York corporate media when they come to Florida and attack Publix,” he said. “I mean, like, maybe people like their dogs better than Publix, but not (by) much. It’s one of the most popular brands in the state.”

DeSantis said it would have been “malpractice” not to include the Lakeland-based supermarket giant in the state’s vaccination rollout plans.