Billionaires Clash With Alden Over Future of Tribune

A few weeks ago, New York hedge fund Alden Global Capital LLC was on the verge of acquiring Tribune Publishing Co. —home to the Chicago Tribune, Baltimore Sun and other U.S. metro newspapers—with seemingly no one in its way.

Then, reports the Wall Street Journal, it offended one of its partners in the deal, setting off a battle that could help shape the future of local news in America.

Maryland hotel magnate Stewart Bainum Jr. had worked out a side arrangement with Alden Chief Executive Heath Freeman to buy the Sun, a paper Bainum grew up reading. Then, in Bainum’s view, Alden tried to raise the cost of a fee agreement that would substantially jack up the price, people close to the situation said.

Bainum told his advisers late on the afternoon of Friday, March 12, that he was worried he could no longer trust Alden, according to a person familiar with the matter.

That evening, the 74-year-old got on the phone with his bankers and decided to attempt a stunning 11th-hour move: his own bid for the whole company, which he announced by the end of the weekend.

In a matter of weeks, Bainum orchestrated a $680 million bid, at least for now besting the $635 million offered by Alden. He pledged $100 million of his own money and quickly enlisted the backing of 85-year-old Swiss billionaire Hansjörg Wyss, who has offered to provide the rest, according to filings and people familiar with the agreement.

If successful, Bainum and Wyss plan to break up Tribune—with Bainum keeping the Sun and Mr. Wyss, who lives in Wyoming, taking control of the Chicago Tribune. They intend to sell the rest piecemeal, and have attracted interest from deep-pocketed investors for some of the chain’s seven other papers in Florida, Connecticut and Pennsylvania. 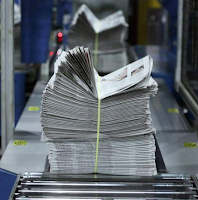 Alden, whose takeover offer had already been accepted by a special committee of the Tribune board, would have an opportunity to counter Bainum’s bid. Tribune earlier this week said it is likely to consider Bainum’s bid superior if he stands by it after reviewing the company’s books. If that happens, Alden would then have to raise its bid or walk away with a $20 million breakup fee.

Alden’s approach to newspapers is to dramatically expand profit margins through cost-cutting, combining services, outsourcing and selling off real estate. Its newspaper company, closely held MediaNews Group, which publishes some 70 daily papers including the Denver Post and San Jose Mercury News, had a profit margin of 17% in 2017, according to a person familiar with the matter. By contrast, the New York Times Co. ’s margin was under 1% that year, while Gannett Co. came in at 1.7%, according to public filings. Alden has declined to disclose more-recent numbers.