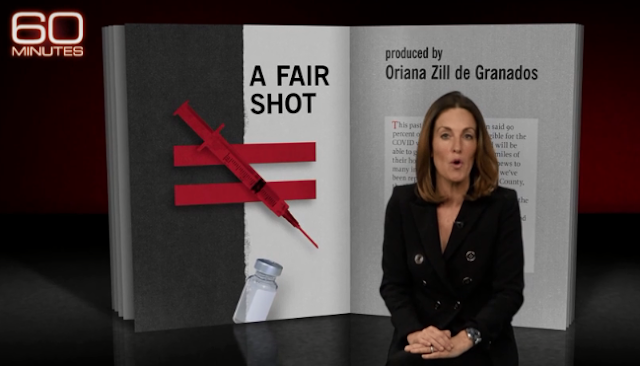 Florida Gov. Ron DeSantis (R) sharply shot down reporting by "60 Minutes" alleging he funneled the state's coronavirus vaccines to rich communities and privatized the vaccine rollout to benefit donors while many minorities in the state struggle to obtain access to an inoculation, reports The Hill.

CBS reporter Sharyn Alfonsi presented a far-ranging report for "60 Minutes" Sunday evening critical of Florida's vaccine rollout. Among other allegations, Alfonsi said DeSantis gave a contract to distribute coronavirus vaccines to the grocery store chain Publix after Publix made a $100,000 donation to his political action committee.

DeSantis declined a request for an interview, Alfonsi said, but she caught up with him at an event south of Orlando.

"Publix, as you know, donated $100,000 to your campaign and then you rewarded them with the exclusive rights to distribute the vaccine in Palm Beach," Alfonsi told the governor.

"So first of all what you're saying is wrong," DeSantis replied. "That's a fake narrative. ... I met with the county mayor. I met with the administrator. I met with all the folks in Palm Beach County and I said, 'Here's some of the options. We can do more drive-thru sites. We can give more to hospitals. We can do the Publix.' And they said, 'We think that would be the easiest thing for our residents.'"

Alfonsi pressed DeSantis, saying his critics say the inequitable vaccine distribution and awarding of the contract to the grocery store to distribute the vaccine amount to a "pay for play" scheme.

"It's wrong, it's a fake narrative," DeSantis said. "I just disabused you of the narrative and you don't care about the facts because obviously I just laid it out for you in a way that is irrefutable. So clearly it's not."

Publix told "60 Minutes" there is no connection between the supermarket chain's campaign contributions and its partnership with the state to administer the vaccine.

Meanwhile, Mediaite reports CBS News took broad editing liberties in Sunday’s edition of 60 Minutes, cutting most of DeSantis’ words out of a segment taking aim at him.

The program included an exchange between DeSantis and the network’s Sharyn Alfonsi, who asked DeSantis at a public event about Publix grocery stores in Palm Beach briefly receiving exclusive rights to deliver Covid-19 vaccines.

“Publix, as you know, donated $100,000 to your campaign, and then you rewarded them with the exclusive rights to distribute the vaccination in Palm Beach,” Alfonsi claimed. The program showed DeSantis replying to call the claim a “fake narrative,” but excluded the Florida governor noting that 90 percent of Florida’s senior citizens live within 1.5 miles of a Publix.

The portion of DeSantis’ excluded reply also revealed him saying that Publix was the first to “raise their hand” for the program in question, which was conducted on a trial basis.